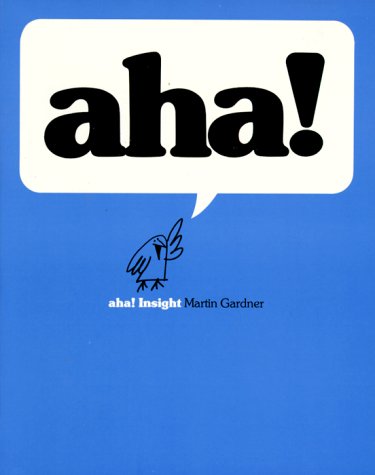 For a book that, to the best of my knowledge, has never seen a reprint after its initial 1978 publication, Martin Gardner’s aha! Insight does seem unusual for how it popped up in my life repeatedly but obliquely before I finally read it cover to cover a couple of months ago. I first heard of it from a childhood friend, likely one of the first book recommendations I’d ever received. Once per decade or so since then I’d happen to find myself in the presence of a copy, able to flip through it curiously, but never with the opportunity to actually read it, much less obtain it for myself.

The past 12 months seemed to run particularly thick with encounters between this book and myself, however, which is to say that all of two such instances occurred. Last fall, a generous member of the interactive-fiction enthusiast community added a copy to the IFComp’s prize pool. (They asked me to render the book’s title in the prize listings with a small “a”, just as it appears on its own cover, a practice I carry over to this blog post.) Then, earlier this year, a friend suspected that a smarty-pants web toy I made, based on a notion I’d read someplace ages ago, actually originated with aha! Insight — but regretted to add they couldn’t find a copy in their own library to prove it.

This latter event happened months into my current and ongoing book-reading kick — the one that coincides with my maintaining this blog, not coincidentally — and so it came to pass that only a few days later I took home up a somewhat waterlogged and discolored but perfectly functional copy of the book, coming into my hands via the Providence Public Library.

While interested in its subject matter — an collection of puzzles meant to stimulate intuitive leaps, and demonstrate ways to generalize intuitive thinking in real life — I found myself at least as involved with the book as an artifact. As with my revisit to The Wonderful Flight to the Mushroom Planet earlier this year, I strongly associated this book with my own childhood. But re-reading Mushroom felt rather like spending the day with a now-elderly family friend, enjoying the pleasure of its company as an adult myself for the first time, appreciating aspects of it I couldn’t when I was eight years old.

aha!, on the other hand, came into my life like something time-slipped. I had the uncanny impression that it had followed me through several missed connections down through the decades, and had finally caught up with me. Its physicality seemed far more present than most anything else I’d read lately. The fact of its never seeing a reprint or repackaging assisted this impression, of course; everything about the book’s design pins it securely to the year of its creation, far moreso that its content does.

I began to read it while on a bus trip to Boston, and I immediately found myself smitten and nostalgic over its unmistakably 1970s typeface.

Bus-reading is Gardner's seminal "aha! Insight". This typeface. What words wore when I first fell in love with them. pic.twitter.com/rmk2TxHr70

Doug Orleans replied to suggest that the typeface might be the one called “Souvenir”. I think it may be, if for no other reason than this excerpt from Wikipedia’s article on the font:

Due to its enormous popularity in the 1970s, Souvenir has become associated with the typographical excesses of that era and subsequent generations of typographers have come to loathe it. Simon Garfield lists it as the “seventh worst typeface in the world.” Others on record as detesting the type include […] Mark Batty (who called it “A terrible typeface. A sort of ‘Saturday Night Fever’ typeface wearing tight white flared pants.”).

If the “typographical excesses” evoke my early childhood, the artwork points to a time just before it. I love, love that little doodle-bird on the cover, drawn in a style informed by mid-20th century American animation and advertising, something one seldom sees in commercial work on this side of Y2K. Its lowercase, boldface exclamation of the book’s title takes up the whole cover (in jolly, round Souvenir), and the bird appears repeatedly in the book’s internal comic-strip illustrations, every time a character — rendered in the same minimalist, squiggle-abstract, trés-moderne style as the cover-bird — accomplishes the sort of mental leap that Gardner calls the “aha insight”.

I found most of that content to have aged quite well. But for a trivial diversion in the last chapter marveling at old-timey calculator riddles, the puzzles and problems the author poses to goad the titular insights from the reader require no special tools or knowledge other than rudimentary math, and I did not at all feel out of time while thinking them through. (Well: a bit of casual racism, the sort an enlightened white person would have likely cringed less at 1978, appears briefly towards the end as well. But, other than that.) In each puzzle’s lengthy section on variants and further study, Gardner showed no qualms about veering into rather advanced notions of algebra or geometry without much prelude, sometimes making me wonder who composed the book’s intended audience — upper high school students, perhaps?

I can only speculate, because despite my frequent-if-tangential re-encounters with this book, the web seems to feel unusually amnesiac about it. The oddball, vertically sequenced comic strips illustrating the book apparently came from a set of filmstrips, as noted in the book’s preface, which does suggest an originally pedagogical context. To my disappointment, though, I cannot locate evidence of these filmstrips anywhere on the public internet, much less presented in full color with synchronized sound on YouTube. Even stranger, the book seems to lack a Wikipedia article entirely — which, alas, means I cannot share the name of its artist at this time.

Happily, the web does make it easy to find used copies, one of which now makes its way to me. I knew, when reading the Providence copy, that I held a book worth owning, in part due to a particular bridging of decades I’d like to spend more time with. When introducing a new topic, Gardner’s often linked to one or another “new” field of mathematical or engineering study, writing with real enthusiasm about how bright men and women bent their minds this very moment towards unlocking exciting new potentials. None of these carry the blunt hindsight-obviousness as, say, Wow, “networks” of interconnected computers, who knows where that will go would have. As such, I honestly had no idea, reading the book this year, whether any of these named technologies or studies flourished or fizzled. I look forward to revisiting them.

As for my friend’s theory about aha! Insight as the source of my universal-encoder gag: alas, no mention of that in here. However, with some brains-racking I recalled the true source: The Next Book of Omni Games by Scot Morris, which I treasured for a time in high school. Unexpectedly, a great deal of other material I enjoyed form that book did end up originating from within Gardner’s big blue book; Morris apparently repurposed stuff from it wholesale and liberally. Which, if anything, feels entirely in-character for this obscure volume, ever echoing through my life for no clear reason.

(I almost feel bad, now, at the thought of bottling that strange lightning in my personal library!)