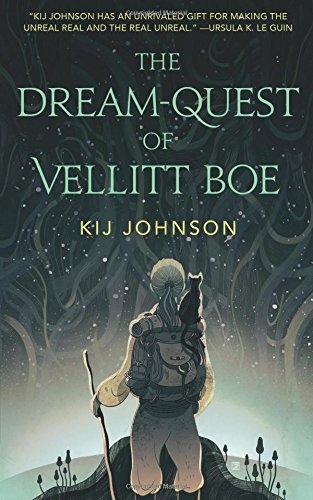 I didn’t recognize this delightful novella by Kij Johnson as Lovecraft homage until nearly the end, when I looked up the name of a strange creature mentioned within, and discovered its original appearance in The Dream-Quest of Unknown Kadath. From there, surprised, I learned of all the connections between the two century-separated stories. Johnson does not mean to deceive; she names the original work in her book’s acknowledgements, and makes clear her motivation for setting the story in the older book’s world. She writes of a desire to “make adult sense” of a personally formative work she loved as a child, in spite of its transparent racism and its utter lack of female characters.

The territory that Johnson borrows from Lovecraft is “the Dreamlands”, a dimension which appears to be knit by men — and men, specifically — dreaming a certain boys-own-adventure dream in resonance. The sky resembles a rippling, patchwork quilt, highly intelligent housecats travel with agendas, and all the world’s people fear an unseen but very real pantheon of childish, squabbling gods. In one corner of this land, tucked away like the Shire, Vellitt Boe teaches at a women’s college. One of her students, the daughter of an important patron, elopes with one of the dreaming outsider-men, promising ruin to the college (either basely financial or divinely wrathful) if not amended immediately. And so Boe, herself a retired adventurer, straps on her kit and grimly sets out to retrieve the runaway.

Seen through Boe’s eyes, the Dreamlands resemble a world that only grudgingly accepts notions of gender equality, and without letting go of thoroughly male-dominated hegemony. This comes in part, it seems, because men vastly outnumber women in the Dreamlands — something that Johnson layers on to Lovecraft’s vision to explain certain discrepancies in hindsight. Of course, it doesn’t feel at all difficult to draw parallels between Boe’s trek through her fantastic landscape and a real-life woman’s mundane travels. Her perspective reminded me strongly of that of the protagonist in Charlie Stross’s The Annihilation Score, also a middle-aged woman, and who just like Boe finds herself struggling to belong to the only world she has even as it renders her increasingly invisible.

For all this, Dream-Quest keeps its focus on Boe’s quest, larger than this one burden she carries, however constant. Assisted perhaps by my accidental lack of expectations stemming from my unfamiliarity with the source work, I loved the whole strange, engaging adventure, whose satisfying conclusion I arrived at in a single sitting. The author makes clear her own lifelong admiration of Lovecraft’s surreal settings — and the weird creatures and cultures that populate it, both above and beneath the earth — and deploys them with such an original and interesting voice that, as I said, I had no idea until the end that I read a remix.

The other facet that stood out notably (in that I took notes about it) involved Boe’s obsession with her own age. Perhaps understandably, having not rambled through the Dreamlands in decades, she sees at every step visions of young Vellitt, incandescent with beauty and foolish confidence. She thinks constantly about the differences between that woman and her present self. In the middle of her adventure, she reconnects with an old flame, but realizes with distaste that he sees her as she was, now how she is. Does Boe realize the irony of her (not unrightfully) rebuffing him, when she lets herself carry the very same delusion? Perhaps so, and maybe that helps her better accept her particular transformation at the end of her quest.