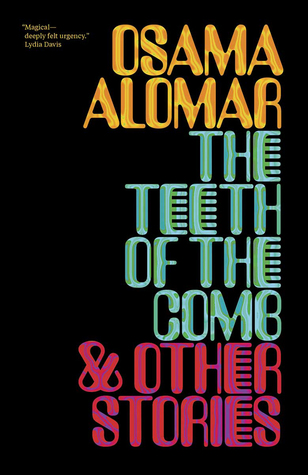 One line in my notes for this book reads “Syrian Robot Chicken”. Please believe me when I say I feel the appropriate level of remorse over this. But, I also can’t deny how I rather consistently hallucinated bursts of channel-change static between Osama Alomar’s dozens of surreal micro-fictions, particularly when a cluster of tweet-length morality fables stumbled directly into a three-page love story or war allegory without any hint of segue. Well, I liked it!

The book also brought to mind Richard M. Dorson’s Buying the Wind, a freshman-year textbook that has somehow remained in my possession for a quarter-century, and which I’ve found myself picking through as occasional bedtime reading for a year or two now. The bulk of its material derives from folktales that Dorson collected while traveling the rural United States in the early-to-mid 20th century, and its sections range in shape from bullet lists of one-line aphorisms about wives and donkeys to chapter-long hero-tales accreted across generations of bedtime stories. As such, and given their clear common source, The Teeth of the Comb’s many tiny stories let me imagine them as oral traditions of an unknown culture, organized according to some unguessable principle.

Naturally, we can’t so cavalierly compare Alomar’s work to the stories Dorson transcribed, because despite my flights of fancy the author makes no claims that his work has any source other than himself. But then, every line that Dorson wrote down came to him through an individual telling it to him. Each of Dorson’s sources were not passive storehouses of cultural texts, but living people who expressed their cultures’ stories in their own way, making them every bit as alive and individual as their tellers. So, yeah, who’s to say.

The Teeth of the Comb takes its title from one of its closing stories, a short parable addressing the danger that individual pride can pose to a larger community. But that seemed to me a bit apart from the book’s most common theme, one that licks at the edges at every page: the toll of war. Over and over, there are descriptions literal and otherwise of gnawing hunger and privation, of losing one’s nation and one’s family — perhaps to death, perhaps to the terrible sorts of foggy uncertainty particular to modern civil wars. Even when the stories focused on more abstract concepts like humanity’s bottomless capacity for senseless violence, I always felt them drawing from the specificity of contemporary warfare.

Yes, I allow myself to read into the author’s intent, based on what little I know of his background, but I dare say it seems a reasonable assumption here. And as such I let myself appreciate (savor not being quite the right word) a voice I realized I have rarely encountered in my reading, that of the civilian directly affected by war in his homeland, and one tragically continuing even as I read his words.

I took a picture of one of the less explicitly war-shattered stories from the book, because I laughed when I read it; I thought it was pretty great. It’s basically the official Osama Alomar story of my Twitter timeline. I read this book because it sat on my local public library’s new-fiction shelf, its cover looked cool, and it seemed like a relatively easy way to score some perspective outside my usual fare.