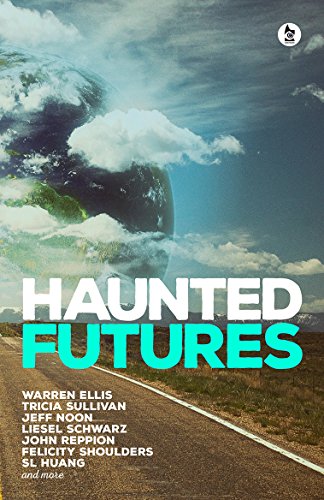 This new short-story collection serves as the first fiction I’ve read, speculative or otherwise, published after 2016. Its editor, Salomé Jones, describes in its preface how she challenged writers to interpret the title “Haunted Futures” into short SF stories, then collected the cream here. And while many of the results are ghost stories, it is the specter of our current era that haunts every tale most thoroughly.

In the late 1990s I went through a Harlan Ellison phase, devouring not only his own stories but the seminal Dangerous Visions collections that he had edited decades before. I found them engrossing on multiple levels, but especially as documents of their own times — the late 1960s and early 70s — as recorded through the lens of SF. Ellison assisted the insight of all his future readers by penning a (usually lengthy and acerbic) introduction to every story, explaining why he chose it for the volume, and in the process overtly binding each story to the cultural context of its original authorship.

Even though Haunted Futures lacks these story-by-story introductions, the collection still brought those ancient books to mind. I wondered, while reading it, if I felt something like what a contemporary reader of Dangerous Visions would have — experiencing the stories as the fantasy-distilled fears and hopes and angers of the era I now find myself living through. That’s what this new book delivered for me, certainly. It doesn’t have much in the way of explicit bindings to the present; there’s a throwaway reference in one nasty little dystopia that transforms Mar-a-Lago into a literal whorehouse, for example. But every future described in this book lies steeped in flavors of extremely present uncertainties that I recognized intimately well.

I quite liked almost all of these stories, thoroughly enjoying most and skipping over only one, a lengthy X-Men pastiche not to my taste. I could recommend this collection to any reader of speculative fiction not averse to a good ghost story, and not afraid when the ghost wears the face of now.

An aside: due to an entirely unique set of circumstances, this book also gave me a lifetime-first shock of turning a page and unexpectedly finding a new story written by someone I know. In this case, a delightfully morbid tale of cosmic madness by Lynnea Glasser, whose interactive-fiction work I’ve had the pleasure of curating during my current tenure as IFComp’s organizer. So, that was cool.