I have removed all the Disqus-based comments sections from Fogknife, only six weeks after starting the experiment. I wrote at the time that I’d keep them up through December at least, but not only have I grown disillusioned with the idea, I’ve since envisioned and applied an alternate approach to ✨social engagement✨ that I already like a lot better.

Please understand that I do value and appreciate the Disqus comments that I did receive, which in their entirety comprised my friend Doug shouting “First!” on the post where I announced the availability of Disqus comments. However, last month I got the idea to adjust the scope of my experiment to allow the addition of the Reply to this post on Twitter! hyperlinks currently visible on a few recent posts.

I’ll see how those links feel for the remainder of the year, instead. If I find myself really enjoying them, I may add Twitter-based back-links as a permanent Plerd feature. But in the meantime, I just felt bad about how crowded my posts looked with all that complicated Disqus-branded stuff lounging across a fat stripe of vertical space — all of it utterly inert, despite Doug’s best efforts. The humbly sized Twitter links, conversely, look exactly as I want them to, and do just what they say they do. And they do it all off-site, and I have to admit to myself I just like that better.

And here I must pause to genuflect in the direction of feeling just as complicated about Twitter, lately, as every other inveterate Twitter user I know. At a local event recently, I reprised a talk about blogging that I first wrote in 2015, and all but tripped over my own tongue when I encountered my own scripted line “I love Twitter!” Well… a lot can happen in two years, I suppose. I have a small pile of half-written ruminations exploring this more, and I hope to finish one someday soon. 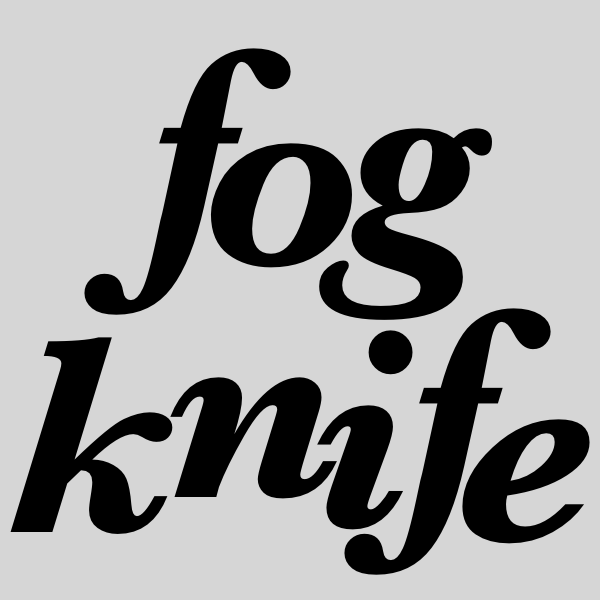 A couple of weeks ago, I made like Marissa Meyer and designed myself a Fogknife logo. It replaces the found-art drawing of a physical fog knife by one “K. Sullivan” that I used on this blog’s rechristening announcement, and which I subsequently used as a default image for social-media metadata.

While I feel prepared to perform any rhetorical gymnastics necessary to defend the first instance under Fair Use, seeing Sullivan’s drawing (often automatically and painfully cropped) in Twitter or Facebook card-style summary-links made me wince. And since I quite deliberately added greater metadata support to my blog software recently, I felt reminded of my appropriative sin more than ever. So, I did this instead.

I created the logo using the same technique I used to design the IFComp logo, which is to say: I opened up Pixelmator, amused myself for a while by pushing letters around in a big square, and then added a single color to the square and called it a day. I still think it looks kind of cool, and so I judge it not half bad and leave it as it is.