I read The River of Consciousness
February 2, 2018 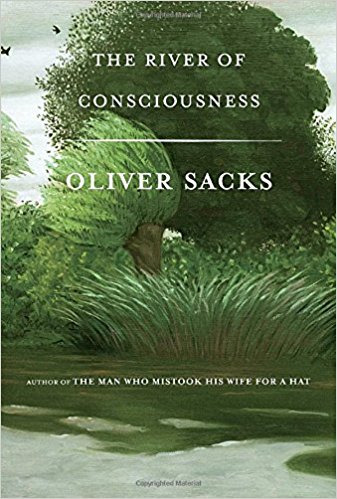 I know of Oliver Sacks’s work through a somewhat oblique angle, mainly through his many guest appearances on Radiolab (consistently one of my favorite podcasts over the last ten years). It was through Radiolab that I heard about his terminal illness in 2015, and his death soon after. A recent episode focused on how he spent his final months writing, writing feverishly, every moment that he could. If I understand correctly, this resulted in three posthumously published books — a memoir, a farewell, and The River of Consciousness, Sacks’s final collection of popular-science essays. The Radiolab episode mentioned the latter by name, and so I read it last month.

River does not make its connective theme obvious, though it assures us that it does contain a deliberate arrangement; its preface, written by one of Sacks’s colleagues, relates how the doctor prescribed the order of the book’s contents two weeks before his passing. The essays do share a common interest in the creative self (to borrow the title of one consituent article), a study of how the best work we make comes not just through focus and study on some topic, but also allowing ourselves to put things down for a time, to always investigate new interests, and check that our old assumptions still hold — while also minding that we don’t forget them entirely.

The book’s initial essays give us miniature biographies for two of Sacks’s personal heroes, focusing attention on the lesser-known parts of their careers. Two articles concern Darwin’s long life after On the Origin of Species’s first edition, where he continued his self-motivated studies in biodiversity, often recruiting his ever-growing brood of children as co-investigators. He published book after book, and at the same time never ceased to revisit and revise Origin, the masterpiece of his youth, into new editions. Sacks writes too of Freud’s initial career as a neurologist, and the author of at least one groundbreaking study in that field, prior to starting his foundational dig into psychoanalysis. Sacks maps out how the latter calling, while both distinct from the earlier one and also utterly eclipsing it, still grew out of Freud’s years of thorough exploration of a neighboring topic before inspiration and intuition drove him in new directions.

Running through the book’s midsection is its title essay, an informed speculation on an apparent paradox revealed in the study of human consciousness that I read with great interest, especially after my only recent digestion of Dennett’s Consciousness Explained from 1991; I welcomed this survey of more current research on the subject. Essays on the banks of River’s “River” include observations both personal and professional on the nature of everyday cognitive failures regarding mishearing, misperception, and migraines. And then “The Creative Self” relates many examples from the scientific literature — as well as Sacks’s own experiences — that suggest the mind’s ability to fork off a “hibernating” sub-self to continue working on interesting problems below the level of consciousness, their solutions bubbling up in brightness when one least expects it. Sacks ends this essay on such a high note, celebrating the rare moments when this creative self, prize in its jaws, returns and re-merges with his own conscious self — a state he identifies, simply, as his best self.

After a reprinting of the subtle and poignant “A General Feeling of Disorder” — serving as the one overt nod in this book to its author’s imminent mortality — River ends on a warning that struck me as something like Sacks’s own, short and focused version of Sagan’s Demon-Haunted World. In the last essay of his final book, Sacks admonishes the reader to beware the scotoma in scientific research — here using the clinical term for gaps in an individual’s perception that originate in the brain, such that the person isn’t conscious of what they can’t see. Sacks describes the startling ease with which scientific discoveries, even published ones, can slip away forgotten for years, decades, or longer. It reminded me of women like Rosalind Franklin who didn’t receive timely recognition for their own work, but Sacks here writes of a broader phenomenon here that doesn’t necessarily happen due to willful ignorance or intentional suppression. Rather, knowledge needs to circulate to stay current. If a publication doesn’t catch on and find a home among the broader scientific community, then all the information it contains, no matter how true and valuable, will necessarily pass into darkness. This occurs whether the information gets blocked by opponents, or merely fails to thrive due to an accident of unlucky timing.

The fact this happens anyway, even despite best intentions, means that diving into the archives from time to time in search of lost knowledge remains a valuable skill for any researcher, one that Sacks himself exploited many times during his long career. And that’s the note he leaves us on.

As is very much anyone’s right after decades of authorship, Sacks peppers all his essays liberally with references to his earlier writing. I allowed myself to let this justify the pleasure I feel when I link within my blog posts to my own ever-growing history of online writing, however infinitely less interesting or relevant it may be. In particular, River contains a multitude of callbacks to 1970s’ Migraine, and to a lesser extent The Man Who Mistook His Wife for a Hat. The latter appears to serve as Sacks’s most well-known book, and I’ve already begun reading and enjoying it for the first time, however odd it feels to read the voice of the same author from 30 years earlier.

Previous post: Apple must drop its partnership with Fox News