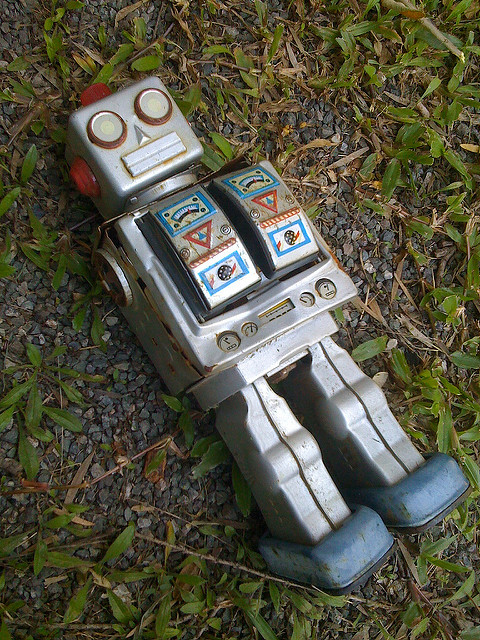 Because I had let praise for the game burn for most of a year in my social-media circle prior to trying it myself, I knew about Nier: Automata’s final consequence many gameplay-hours before encountering it. While the event itself therefore didn’t surprise me, I did find myself disappointed at how loosely coupled the whole epilogue seemed when set against the preceding hours and hours gameplay. I awoke the next morning unexpectedly angry about it all. A little bit of introspection explains and dispels the latter reaction, but the deeper dissatisfaction lingers, a flaw endemic to the way I mishandled my approach to this brokenly beautiful and deeply strange video game.

Clearing the anger away, first: common knowledge tells us that the act of smiling, or raising one’s gaze off the gray pavement and towards the brighter sky, can improve one’s immediate mood a little bit. The brain, perhaps, observes the body as it displays the effect of happiness, and so it retroactively generates a little happy-feeling in order to make it sensible. Just so, when I thought of seeing all my saved progress in Nier get deleted in slow-motion the previous evening, screen by screen and line by line, my self-observer figured I must have done so in a pique of rage. Dutifully, it served up a steaming platter of disgusted anger with the game, even though I never felt that way while actually playing it! I knew this would fade in time, but for the whole morning I seethed, wishing I could delete the game more: from my memories, from the universe, for all time.

With that having burned itself away, I can now fall back to my original disappointment with the ending and epilogue. Considered by itself, I did enjoy the final end-credits bullet-hell shootout, and its unexpected twist where gradually accumulating messages of international encouragement lead to assistance from the helpful ghosts of these past players. (While I knew about the final deletion, I didn’t know the specifics of the path that led to it.)

This experience ties in solidly with the oddball main-game mechanic where, Dark Souls-ishly, you continuously stumble across crumpled android bodies representing other internet-connected Nier players who’d recently hit a game-over nearby. Besides looting their stuff, you can “pray” for them to give them a small in-game bonus. (As with actual prayers, you never receive any feedback about this, and must take it on faith that the game actually does anything at all with your kind thoughts.) Further, each corpse offers a little “death poem” about its predicament, assembled by its player, and you yourself can compose these when you fall in battle. It’s a wonky-fun way to connect with otherwise unseen Nier players around the world, and the epilogue harkens back to this by inviting you to assemble from similar menus a one-line encouragement (or discouragement, or dismissal of the game as a piece of crap) displayed to players struggling through the final challenge.

However, other than a single line of incidental dialogue, nothing else in the game interacts with or even acknowledges this respect-the-dead mechanic. No other characters remark on the lifeless bodies littering every part of the landscape, whether desert wasteland or treetop village, much less suggest the value of tidying them up. And the game doesn’t acknowledge this lack of acknowledgment, either; it treats the phenomenon as an external projection onto the world’s surface, invisible and insubstantial to all but the player. Now, I didn’t mind this while playing the core game; it seemed just another oddity in a game so rattlingly full of oddities, a game which like my beloved Deadly Premonition stuffed so much enthusiasm and variety into its casing that I felt quite willing to overlook the visible seams. But that the game’s ultimate ending, the note that it chooses to leave us on (and permanently), would choose this particular loosey-goosey mechanical aspect over anything else in the story, the characters, or the world they inhabited? It seemed so strange to me, and unsatisfying.

When I asked for comment on Twitter, friends who love the game argued that its ending connected strongly to the work’s other overall themes. I can only defer to them here, due to my other major difficultly with Nier: the characters and the anime-style melodrama arcing between them are so very stylized and abstract that I had a lot of trouble feeling connected to any of it myself, much less personally invested. I assume much of this comes from my bringing Western prejudices and expectations to a work that would prefer I approach it a little less concretely, with more of an appetite for style and suggestion than concrete exposition.

As time passes — even just a day or two — I already feel myself softening a bit towards some of Nier’s peculiar design and aesthetic choices. For example, I hungered from the start to know more about the main characters’ striking appearance, especially their bizarre costuming: deadly katana-wielding battle-androids who resemble porcelain-skinned teenagers dressed in gothic lolita fashion, all flowing black skirts and high heels. The civilian groups they mingle with comprise adult men and women dressed practically in drab earth-tones, marking the protagonists as quite odd-looking within the game’s world as well, even though nobody in that world ever remarks on the difference.

I couldn’t help but let myself expect some future plot discovery that would reveal their basis on their forgotten inventor’s beloved childhood dolls, charged with personal meaning — or perhaps the same inventor’s tragically lost children. But: the game provides no explanation at all! My seeking “sense” in why 2B and 9S look like Harajuku teens posing for tourists’ Instagram feeds represents me bringing an entirely incompatible frame to my reading.

If I let go of taking everything so goddamn literally for a second, I can start to make some pleasantly loose but real thematic connections between the costumes and the larger setting. I do love Nier’s depiction of a city some centuries after humanity’s extinction, the tall gray buildings reclaimed long since reclaimed by green, tenacious nature. It is haunting, and beautiful, and lonely and sad too. And viewed in that light — mixing with the android warriors’ self-deceiving mission based on their inability to accept their forebears’ death — 2B’s black dress starts to seem positively funerary, mourning raiments for a dead world, even as new life continues to thrive all around her.

So, that’s cool. I like that. And I like other individual aspects of this game too: the unexpected turn into deeply traumatic horror that 9S’s story takes, and the bleak humor found in various interactions and side-quests involving the “machine lifeforms”. But Nier: Automata presents so much of its overall narrative and theme through profoundly stylized abstraction, with the costuming serving as only the most obvious surface example. I’m afraid I just did a bad job processing most of it. While I felt fine just letting it pull me along for the ride during my dozens of hours chewing through the main game, by the time the ending reached out to make its amazing personal and emotional connection that had so deeply affected my friends, it mostly passed right through me. I expect I may appreciate the game, ending gimmick and all, more in memory (while also enjoying the irony of that, I suppose). But I regret missing out on any more immediate appreciation — and, as such, I find it hard to not to feel today a little regret about investing as much time and attention into the game as I did.