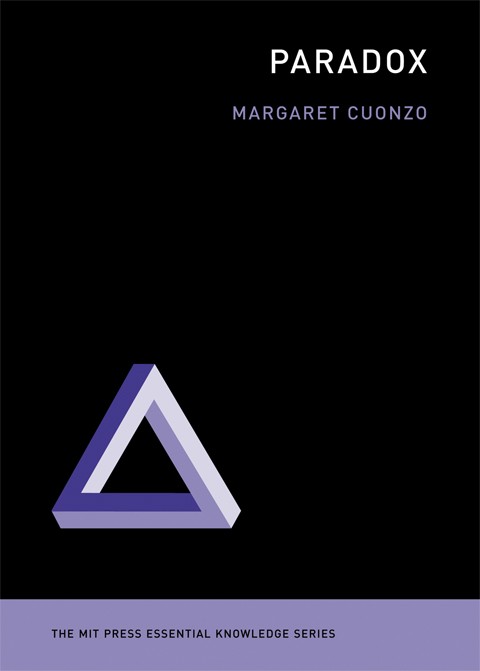 I last month managed to get in on the tail end of a humble bundle of MIT Press Essential Knowledge books. I had, coincidentally, just written about my appreciation for one of them, so the opportunity to sweep up seventeen more at a bargain price seemed too auspicious to decline. But then I faced a problem: all the books have simple, one- to three-word titles describing their subject matter in the most broad terms — Robotics, or Metadata, or Free Will, to name a few — rather than describing what novel perspective or thesis regarding that topic that this volume brings. All these titles name topics I know at least something about, so none really sparked an immediate curiosity for me. I had read and enjoyed The Future (perhaps the most cheekily ambiguous of the lot!) in part because I know its author, but lacking that light for further guidance, I fell back to what sounded the most fun. And thus did I read Paradox by Maraget Cuonzo.

I had a good time with it! The book opens by cataloguing types of logical paradoxes, then proceeds into well-worn strategies for solving them — or at least disarming them. These range from “one link of the logical chain it demands dissolves under scrutiny” to “this entire premise makes no sense”. The author’s favorite paradox (and, if I recall correctly, the core of her own academic work on the subject) is the sorites paradox, which she describes this way:

(Digression: I first encountered this paradox in an illustrated Book of Amazing Facts for Kids. Under the heading “What is a heap?”, it stated that one grain of corn is not a heap, and neither is two, and in general adding one grain to a non-heap collection of grains wouldn’t suddenly transform it from non-heap to heap status. So how would “a heap” ever form? Accompanying this, a cartoon American Indian counted on his fingers while looking confused. I assume that the implied kinda-racist joke would make even less sense to a white kid of today than it did to me circa 1980.)

Having established this vocabulary and basic paradox-handling toolkit for the reader, the book presents its thesis, which I shall attempt to summarize: the hardiest, mentally stickiest paradoxes vex and confuse us because they plant one foot each in the very different systems of mathematical precision and practical, everyday language. They use the subtle ambiguities of the latter to either mask logical inconsistencies that a rigorous formula would make plain, or to weigh down otherwise logical terms with worldly doubt and double-meanings. This leaves us with nothing to solve, but rather presents us with a challenge to squint and see through the paradox’s dazzling disguise.

If I understand this correctly, we can apply this lens to the sorites paradox by shaving away the real-world concepts of men and hair, replacing them with more abstract terms. My off-the-cuff attempt follows:

And this checks out, right? It seems a bit pointless, since under this system, all drawn circles would appear to possess “mellowness”, but it doesn’t display any logical inconsistencies. And this helps us see through the sorites paradox’s hirsute veil: its power to confound comes from its application of formal-logic rigor to an inherently, even intentionally imprecise term — the meaning of “bald” — and inviting us to marvel at the result, rather than dismiss it as the natural outcome of a format disagreement. Both statements are made of English-language words, and it seems reasonable to mix them together freely, but of course they produce bogus results rapidly. It holds no more mystery than a CD player that can physically hold a DVD, and even spin it up, but make no sense of it.

Paradox ultimately encourages the reader to apply these paradox-piercing X-ray specs to real-world situations beyond recreational mind-games, retuning them as needed to dispel confusions and confoundments built from mixing practical and precise expressions, whether they arise from lazy accident or cunning malfeasance. And in that respect, this book would seem to teach us a surprising and increasingly valuable life-skill.

Next post: I must become anti-Republican to remain pro-humanity