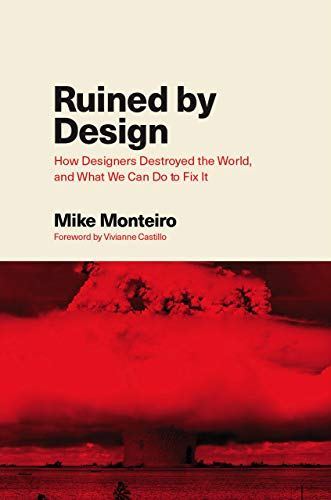 I read this book as part of the IndieWeb Book Club.

Many years ago, the student newspaper I worked at sent its staff photographers to a photojournalism conference. They came back spitting fire, displaying a mix of personal self-empowerment and suddenly withering contempt for the paper’s editorial staff, all of an intensity unique to young adults after their simultaneous discovery of and emancipation from a systemic injustice they had no idea they had labored under. Their declaration of independence made the photographers seem quite difficult to work with for the rest of my time at the paper. This came in part due to their youthfully aggressive stance, but also because we editors were used to treating them as tools — and unused to being told, when our desires conflicted with their judgment, to shove it. And that, of course, was the point.

And that is one point as well of Mike Monteiro’s Ruined by Design, a polemic screaming out from the author’s decades of work as the head of Mule Design in San Fransisco. This particular intersection of career and location has given him a unique ring-side seat to the shaping — he might say destruction — of modern culture by way of technology, and he looks out at all the designers laboring for their corporate masters to increase shareholder value by making the world worse. This short, angry book lays out the case for the calamitous societal pollution he sees his whole field as complicit with, and he rallies his fellow designers — defined, here, as just about anyone involved in the production of consumer technology, from Apple to Facebook to Volkswagen — to redefine their role and reorient their energy before things get any worse.

Monteiro insists that readers accept that design now plays a central role in shaping all human activity. The people that a designer works truly for, he writes, are not the companies who pay them — often growth-addicted and entirely self-serving, however well-intentioned they may have been at one time. (Uber began life as a clever way to connect drivers with some spare time to passengers needing a lift. Now it exists primarily to make Uber ever-larger, and crush anything or anyone in its way.) Instead, the book argues, a designer works for the people who will use the thing being designed. As such, a designer should work in the best interests of these people, and not for the corporations who stand to profit from it. If a designer’s employer asks them to use their skills to make something deceitful or harmful, that designer should refuse — exactly as a doctor should refuse a request to use their medical knowledge to harm someone.

Doctors, of course, take an oath to use their powers only for healing, and Monteiro makes the case that designers in today’s society need something like that too. They also need labor unions in order to better empower individual designers to make tough decisions that would otherwise put their livelihoods in danger. (Monteiro draws on his first-hand experience in San Fransisco to describe how VC-backed technology companies increasingly resemble company towns, providing everything to their employees — and thus making them stand to lose everything, should they ever refuse to carry out an unethical order.) The author goes so far as to suggest that designers should answer to a licensing board — an idea that, he admits, doesn’t have nearly as much current support within the field as the notion of a new labor collective. But Monteiro sees designers as weilding every bit as much power as airline pilots, or lawyers, or physicians. (Let alone motorists.) He feels it past time for that power’s responsible use to be checked by an independent agency.

I also appreciated Ruined by Design’s argument for diversity within design practices, and its naming a simple, one-action path to attain it: hire people from different backgrounds. More diverse backgrounds means more internal coverage of different life experiences brought into an organization, and this in turn means more horrible mistakes averted. He relates the story of how Dr. Frances Oldham Kelsey, one woman working among a sea of men, single-handedly refused to rubber-stamp the approval of thalidomide for use by pregnant women in the US — and thus prevented untold disaster. And as an anti-example, he looks across the street to Twitter today, which he perceives as launched and still operated primarily by white tech-bros who designed a system only around themselves. And thus, no clue about the harassment and abuse it invites, by design, to all users who didn’t resemble them.

I don’t think I’d before this read a description of the virtuous cycle that a proactive-hiring stance can bring to an office — especially once it gets over the hump of initial and perhaps awkward “diversity hires”, leading to a new reality of a suddenly wide-open field of candidates more willing to work there. Using gender as an example axis, Monteiro writes of his own company: “When women apply here, they see themselves reflected in who’s interviewing them, making this feel like a more welcoming place.” That strikes me as pleasantly bankable advice for any organization — whether the money-making enterprises this book has in mind, or the nonprofits that I tend to find around myself.

Ruined by Design has a sometimes strange and uncomfortable attitude towards its own narrative, feeling almost like it was written front-to-back, getting its thesis in-line as it went and not necessarily cleaning up after itself. I take this as intentional to some degree, but still felt distracted by a certain amount of flagellatory loathing towards his own generation of designers that the author engages in before the book really starts to state its case more convincingly. Reading with an open mind, I take the opening screeds that amount to we have ruined everything and should all just die and give the next batch a chance to do better as setting the table for the book’s subsequent arguments that today’s design leadership should put the work in to make room — just delivered in a state of initial shock and hopelessness before the book talks itself into a better mood.

Other oddities include the presence, in the center, of Monteiro’s contemporaneous essay “We build a broken internet, and now we need to burn it” — a very effective provocation when published by itself, but feeling rather at cross-purposes to this book’s core message of proactive improvement. I also read with some bemusement the author’s clear view that Facebook might still redeem itself by way of its designers, if they choose to exert their will from within the companhy — while Twitter, somehow, lay utterly beyond repair or even forgiveness. And yet, I did find compelling Monteiro’s argument that Twitter’s core business model has moved from its original intent of mass intercommunication to a company that makes money by prodding you to get into fights with chortling racists, thus disincentivizing the company from pushing them off the platorm. However jarring, I value this sort of blunt reminder why efforts like the IndieWeb remain important, and worth my own continuing time and attention in the years ahead.

Next post: I played Curse of the Garden Isle

Previous post: Investigations into a present but silent Garfield