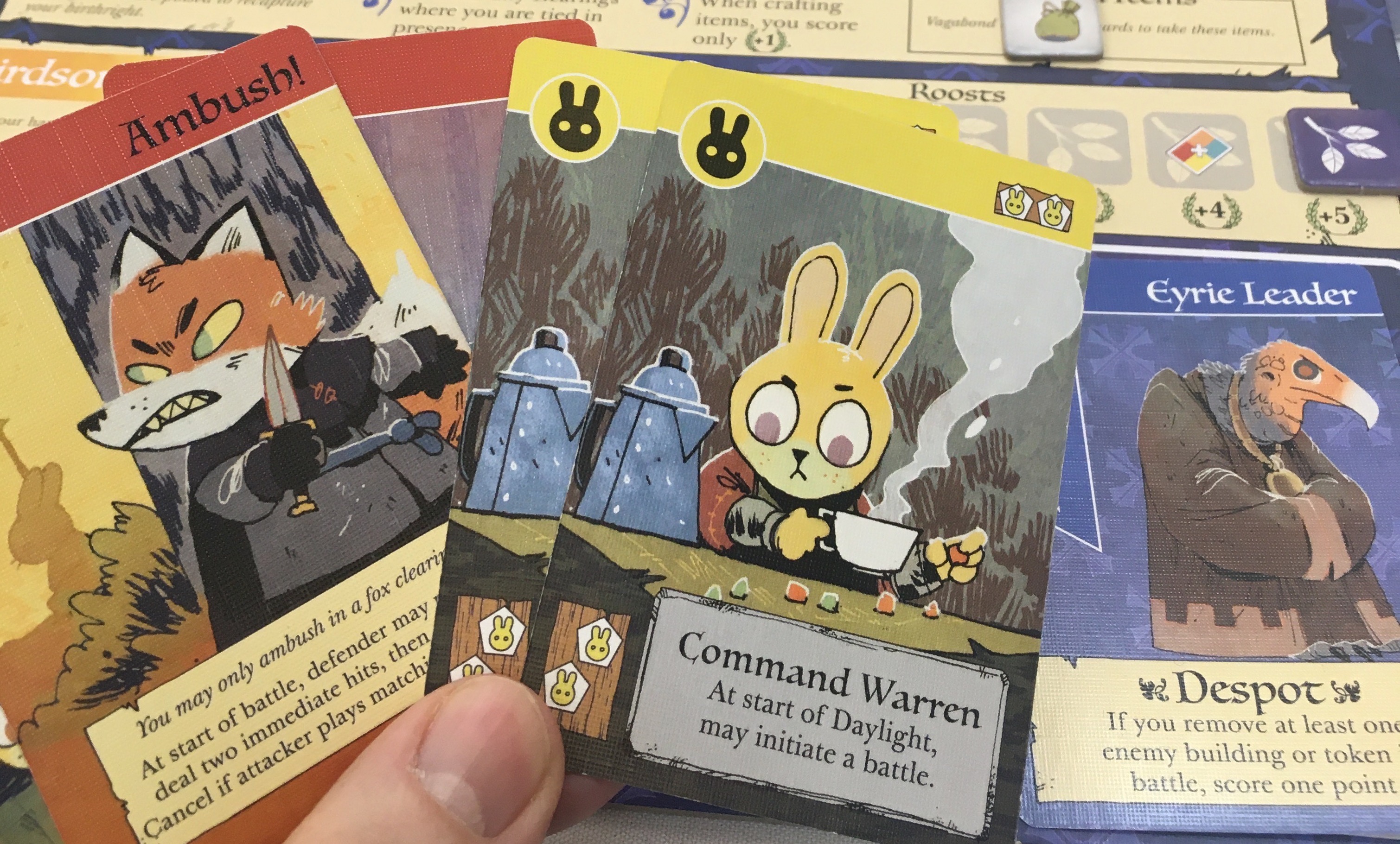 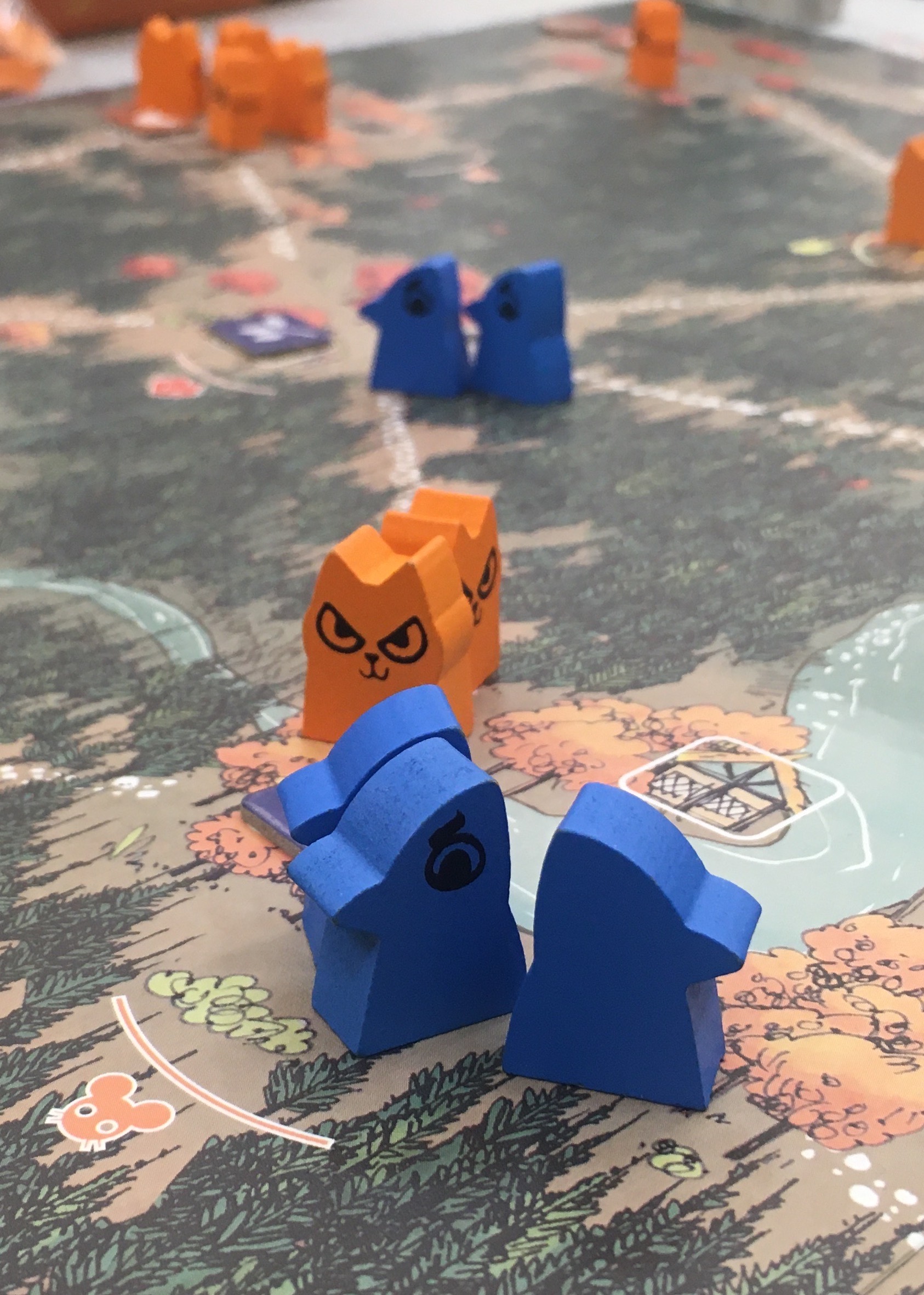 The first time I saw Root played at a tabletop game conference, I felt immediately drawn to its pairing of Cole Wehrle’s crunchy wargame mechanics with Kyle Ferrin’s Nickelodeon-ready aesthetic of scribbly little forest animals dressed like deranged, dagger-wielding hobbits. In the two years since its debut I’d learned its reputation as a very good but deceptively heavy and hard-to-learn game, so I made playing Root my goal while attending Granite Game Summit last weekend. Along with Amy and our pal Jess, I did get a game in, and I wound up quite delighted with the experience, far moreso than I had expected. I must now gush about this game for a while.

Root’s theme, expressed through its mechanics, runs satisfyingly deeper than its surface layer of cute cartoon animals engaged in bloody conflict (a concept that has fascinated me ever since my first traumatic encounter with Watership Down). While I’ve certainly played plenty of wargames where players have heterogenous starting positions or a mutually different mix of units, I have never before seen one so asymmetrical that each participant plays an essentially different game from every other, with a set of rules and a goal unique to that player’s faction. Conflict arises not due to the more typical wargame goal of victory through obliterating the opposing players’ forces, but because those forces lie in the way of each player’s victory-path, seeking the same scarce resources for their own ends. This leads to interactions more interesting and unpredictable than the usual rush to clash at the battle-line.

The four factions of the base set represent four competing interests in a tiny world at war. The intermeshing of their gameplay styles balance surprisingly well, with each having a strong narrative explanation that makes the game’s overall flow quite sensible. I found that once I understood what each side wants, and how they intend to go about it — in terms of both that faction’s unique rules and their “in-world” narrative justification — Root’s whole little box of violently clashing gears clicks together perfectly.

In the morally ambiguous world of Root, the Cats probably offer the closest thing to a villain, insofar as nobody likes an invading army. Conquering despoilers, the Cats begin the game already garrisoned all over the map, having stormed the land just before the game begins. The Cats seek to industrialize their freshly grabbed tracts through a network of sawmills, which beget more buildings, and they score points every time they construct something.

The Cats are organized and flexible, with the least complex ruleset. They simply choose any three of the game’s common actions (e.g. move, recruit, or build) to perform per turn, and do their best to expand and protect their interconnected assets. The Cats’ rapaciousness presents a weakness, as well; to keep scoring, they have to keep growing, and they’ll quickly find they can’t do that without a fight.

The Birds used to rule the world of Root — until the Cats caught them off-guard and forced them to retreat and contract until they controlled only a single clearing. Having just elected a strong new leader, the Birds are ready to explode back out in a show of might and fury, retaking the land they see as rightfully theirs. They want to wrest control of clearings across the map and establish bases there, and so they score points every turn depending upon the number of bases currently active.

The Birds are powerful but rigid, bound to a “decree” of forced moves that their player is obliged to make even longer with each passing turn. Inevitably, the decree will demand an impossible action — for example, a “move an army” action with no legal army-movements available — and the Birds crash into squabbling turmoil, deposing their leader, wiping out their decree, and losing a bunch of points.

I played the Birds faction during my first game, and I adored this mechanical simulation of a cocky warband with no sense of project management, alternatingly roaring ahead and succumbing to expensive infighting. And it provides a tidy explanation for how the Cats managed to get the drop on them, too!

The Woodland Alliance comprises the miscellany of forest critters without a warrior class fed up with seeing Cat and Bird armies run roughshod over their towns and fields, over and over. Though political organization and bands of brave militia, they seek to define a new world of Root ruled by common folk. They score points by spreading sympathy to their cause across the map, and by ejecting occupying forces — no matter what faction they belong to — from a newly emboldened region.

Nobody chose to play the Alliance during our three-handed game, so I can’t really describe its play style! Reading the Root rulebook suggests it has significantly less military force than the Birds or Cats, but can draw up reserves of strength from the land itself by the unique ability to gain territory non-militarily, and then subsequently foment revolt to destroy enemy units.

I can more confidently describe the Alliance’s opposite in the Vagabond, the real odd-one-out among Root factions. Where the Alliance rejects the chaos of war, the Vagabond thrives in it. Reminiscent of the title character from Yojimbo, the Vagabond player controls a lone wanderer who seeks to play all sides off each other while questing for fortune and glory.

The Vagabond is weak but resourceful and slippery, with the most divergent ruleset. An optimal game for them can involve establishing profitable alliances with every other faction and then letting them pound on each other while scoring points at leisure through side-quests. Other players can stunt the Vagabond’s progress by attacking them and smashing up their stuff, but during our game their progress instead acted as a sort of natural time-limit that all the nation-states paid attention to, because how embarrassing if some dork with a bindle took the trophy instead of anyone’s grande armée.

Root’s two published expansion sets introduce four more factions — Lizard cultists! Corvid gangsters! — but they clearly fall outside the finely balanced story told by the four in the core. And, yes, the core game is hard enough to learn as it is. The generous person at Granite Game Summit who came to our aid (answering the call of the Teacher Needed flag we had planted at our table, early Saturday morning) did their best, and succeeded insofar as, hey, we played the game! But having played once, I can’t help but think of how I’d have taught the game differently, and I look forward to getting my chance to do so.

I hypothesize maximum effectiveness in presenting the Cats’ game first, and then summarizing each other faction’s game as variants of the Cats’ rules. Root includes a separately printed two-turn “walkthrough” for a four-player game, and I would want to dive right into that. Rather than opening with a half-hour lecture on the common rules of movement and area control and so on before any player even knows their faction’s goal, let the players immediately get some wood on the board and dice on the table and explain why the walkthrough has them doing what it does. I would expect that most any reasonable player would find themselves engaged and eager by the start of the third turn.

Root has moved me more than any board game has in recent memory. I love it. I very much look forward to playing this game more, either in cardboard or via the digital adaptation set to appear later this year.