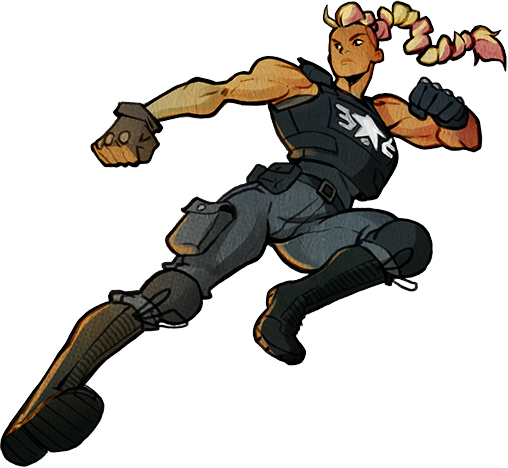 No doubt it says more about the point in my own life when my tastes in video games calcified, but Streets of Rage 4 gives me everything I want from a wholly action-oriented game: a simple, satisfying experience I already find myself returning to again and again. It succeeds in decanting the soul of the early 1990s Sega Genesis “brawler” games into a beautiful new format, adding just enough modern features to feel native to a contemporary console while foregrounding the fundamentals that made the older games great.

You likely know the Streets of Rage games, even if you’ve never seen them before. Starting with 1987’s Double Dragon, brawlers like this were ubiquitous in both arcades and home game systems for many years. They all give you control of a little dude who punches and kicks their way through short, linear levels where low-powered thugs swarm you (and, often, one or more co-op friends) until you get to a set-piece battle with a colorful boss before you move on the next level. The Streets of Rage games for the Genesis brought an interesting emphasis on grapples and throws to the usual formula, as well as a searingly memorable dance-beat soundtrack.

Streets of Rage 4 preserves all these features, and then keeps things refreshingly basic, eschewing the temptation to add anything resembling RPG elements. Every character is as strong as they’ll ever be, from the outset, with all their moves and powers immediately available: at no point do you “level up”, or pause to assign “skill points”. (Not even the NES adaptation of Double Dragon, released over thirty years ago, could avoid adding progressive “power levels” that unlocked new moves.)

The game counterbalances this by offering a surprising level of opposition right from the get-go. On my first dive in, even as I revelled in feeling these familiar controls again, I fell to a Game Over before finishing the first round. This came as a shock to someone who used to play through the entirety of Streets of Rage 2 in one go as a post-exam cool-down exercise in my college days. But of course I had only achieved that level of mastery after replaying its stages many times, enough to anticipate the emergence of each batch of mid-level mooks, and to counter the special attacks of each stage-ending boss. And so it would have to be with Streets of Rage 4, as well!

But: no longer a college student with nothing better to do, I nodded in respect to this, and backed off. Then I dropped the difficulty down to Easy, and convinced my wife (and fellow veteran of 1990s Sega games) to pick up another controller, and we had a grand time smashing our way through the place together, learning its pugilistic geographies at our own pace. I can report with pride that I can now hold my own at Normal difficulty, which is to say that I got better at it, rather than just raising my character’s “stats” until the novice’s strategy of numb button-mashing can prevail. Boss battles that initially seemed impossible, with their unpredictable movement and flurries of super-attacks that smashed me to the mat every time, have through a bit of repetitive practice become challenging but surmountable.

It has been a long time since any video game has won this level of patience from me. Why did I stick with SoR4 long enough to get better at it, while Dark Souls and its ilk — which also demand rote practice and pattern-memorization across multiple failed attempts — tend to drive me away? It must come down to some mix of the brawler’s brighter attitude, its much more streamlined play-style (no skill-point assignment, no inventory management — heck, it just barely has a second spatial dimension), and its willingness to let you very easily bring friends along to help, right from the start.

That leads into one of the two major modern-console fetaures specific to SoR4 that I love: online play works great, even when playing with “randos”. Every time you have an opportunity to choose a character, you can also tap a single button to open your game up to a second player to join you via the internet. The game advertises this feature without insisting that you try it. When I finally did, my enjoyment of the game suddenly magnified tenfold. It gives you neither need nor ability to talk to your anonymous co-op buddies: you just have the joy of slamming through levels together, picking up gameplay tips just from watching each other play, and communicating as needed by improvising (such as jumping up and down near a health pickup to suggest that your worse-off partner come collect it). I unironically compare the experience to Journey: shallower and stupider, perhaps, but recognizably the same core pleasure of effortlessly connecting with a stranger over a shared goal.

Here is a video of me playing through the final level with one such ad-hoc partner. We got up to the final boss together, and I ended up landing the final blow with a sliver of health left. This made my week.

The other new feature is the far more obvious one: every character in the game, whether hero or foe, has become a large, gorgeous, hand-drawn animated figure. I felt real happiness to unexpectedly see these friends from college again like this, older but filled out, never looking so good before. I very much appreciate the designers’ rejection of the obvious “retro” look in this regard. Turning the characters from piles of pixels into big, lushly animated two-dimensional cartoons striding around an old-fashioned linear brawlscape feels like an absolutely correct way to have Streets of Rage keep its core shape while also filling out all the extra room afforded by a modern console.

(One thing that this game takes away from the Sega games of my memory: pausing the game now blanks out the screen to display a big pause-mode menu, in accordance with modern convention. But ancient consoles, of course, would merely freeze the action until you un-paused. How I would have loved the chance to stop time at will and admire the animated artwork with all the characters in mid-stride/leap/kick/fall!)

I observe with interest that, while all the enemies look great, foes original to this game tend to have a much more interesting appearance and animated style than the old-school Streets of Rage baddies making a return. The art directors clearly put a lot of effort into giving the more familiar enemies costumes, postures, and attack styles recognizable from the older games. This limits their expressive range, and also rather dates their appearance to a certain kind of MTV-era aesthetic, all muscle-dudes and Wendy O. Williams-oids shuffling at you in ripped denim and fishnets.

New enemies, unburdened by such constraints, enjoy quite a bit of memorably novel behavior. Favorites include ridiculous “kicker” enemies who flip and soar around the screen without ever taking their hands from their pockets, and punk-rock-science girls who fling vials of acid around for wide-area attacks. You will learn to dread the black-shirted cops whose standard attack involves a one-armed grapple that flings a hero to the floor, then stabs down at their prone body with a taser. (The game contains, as an aside, a surprising — some would say delightful — amount of hero-on-cop brutality, with one level dedicated to storming an entire precinct station, culminating in a battle with a white-haired but roided-out commissioner.) 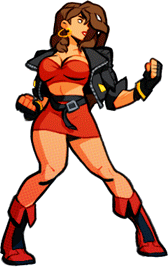 Of the playable characters, series frontman Axel Stone seems to have received the most attention from Streets of Rage 4’s art team, with a new look that has transformed him from a generic punchy dude into a sort of battle-hobo, with a full beard and layers of raggy clothing that flap and bounce as he tears around the playfield. I do wish that my long-time favorite Streets of Rage character, Blaze Fielding, had received as much of a makeover! While I won’t deny that she looks fantastic in the new game’s style, its lore puts the original fighters in their mid-thirties now, and it would have been nice to see her in a costume more seasoned than the classic club-kid look that she continues to sport.

That said, I would never truly deny that Blaze, the woman who spent far more time in my dorm room than any other, can dress any way she wants.

Anyway: this game is pretty great.

This article was also posted to the “games” section of Indieweb.xyz.

Previous post: Narrascope! and an IndieWeb meetup, both this month