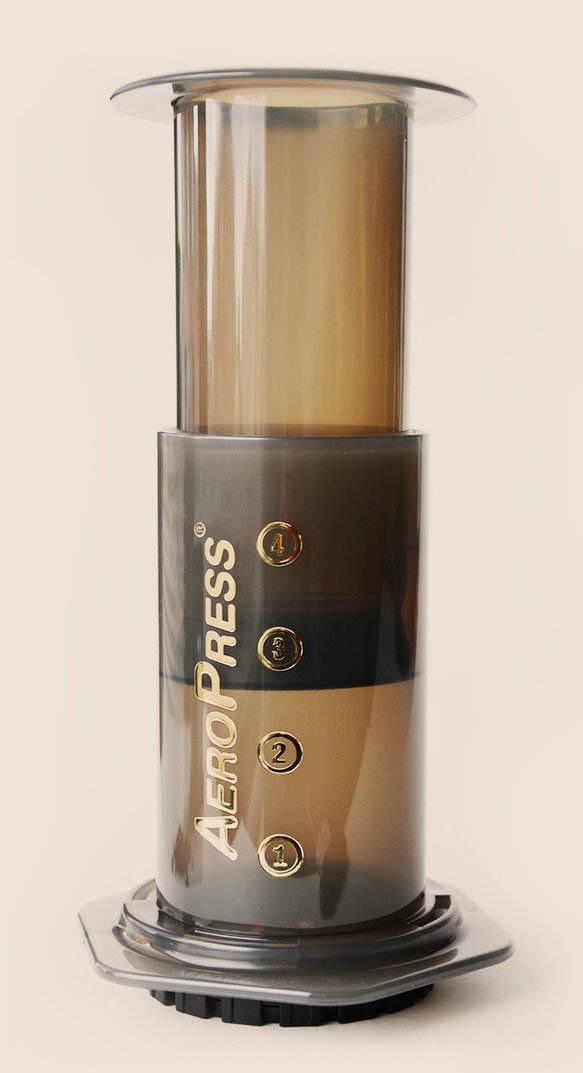 I have sworn by the Aeropress manual espresso-making gadget ever since receiving one as a wedding present over six years ago. We had requested no gifts, but a friend gave us this thing anyway. I quickly came to not only understand why, but to emulate his kind error, passing through a phase of Aeropress evangelism that saw me sending new kits uninvited to any friend who, it seemed, could use one.

The lockdown has put both Amy’s office and my daytime coffee-haunts out of reach, and so I use the Aeropress more than ever, typically pressing out six or eight drinks a day. (An even number, always.) As such, my small annoyances with using the device have amplified — and chances to experiment with my own fixes have multiplied. I shall report one of each to you now.

The Aeropress works best if you can make a nice, slow, even press with the plunger, gradually forcing the column of steamy air down through the sodden grounds for several seconds before the rubber surface actually touches the coffee. This requires focused, muscular pressing — so when the plunger accidentally breaks its airtight seal against the sides of the outer cylinder, which happens far too often, the force of your pressing will instantly squish it down into the grounds. This leaves you with nothing to do but salvage the espresso by pressing with all your might, like squeezing out the last bit of toothpaste. The result often ends up okay, but not what you’d aimed for.

I hypothesize a solution to this:

While preparing the device for use, run the plunger’s rubber tip under hot water for several seconds, and then run the outer cylinder under cold water. Then proceed as normal.

No need to be obsessive about it: if you’re like me, the plunger needs cleaning from its last use anyway (even if that happened yesterday afternoon), so just rinse it off as usual — but make sure the whole surface spends several seconds inundated with nice hot water. We want to encourage that rubber to expand a bit, you see? And then turn your kitchen sink’s tap from hot to cold, pick up the outer plastic cylinder — the thing that you press the plunger through — and roll it around in the stream for five seconds. The idea being, of course, that we subject it to a soupçon of shrinkage.

Now set up and use the Aeropress as usual, and see if you don’t experience delightful friction between the two parts, giving you that satisfyingly slow press.

And that’s my whole idea. I’ve been practicing this habit for a few weeks now, and with absolutely no empirical evidence at all I believe that it helps me make better coffee. I have not tested this hypothesis through even the most trivial scientific verifications that we might devise. Certainly I invite other Aeropress users to run their own experiments, if they wish. In the meantime, I will keep pressing out my pairs of Double Americanos, and hope that this suggestion proves useful to some other quarantined coffee-brewer.

This article was also posted to the “food” section of Indieweb.xyz.