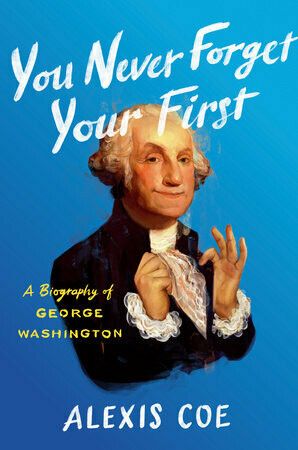 On a friend’s recommendation, I read and enjoyed You Never Forget Your First, Alexis Coe’s short and punchy biography of George Washington. It seems a little uncertain about its own thesis, and ends up a sort of collection of founding-father marginalia, written and published from a 2020 vantage point. But I didn’t know any of it before, and I found myself surprised again and again from all I did learn, so I had a pretty great time.

Coe’s introduction sets the mood by dragging the entire Washington-biography oeuvre — noting with raised eyebrow the obsession that its near-universally male authorship holds with the general’s manly physique, calling the whole bunch “thigh guys”. She found that the women in Washington’s life, meanwhile, tend to get short shrift from biographers — especially his often-demonized mother Mary — and the uncomfortable truth about all the people his family held as slaves gets papered over, except from those books that make it their sole topic.

This made me expect something like a biographical version of Emily Wilson’s Odyssey translation. This, too, overtly set about to retell an objectively unchanging story by casting more light onto the supporting characters — the women, in particular — letting them blossom into as much color and detail as the original text allows. In her introduction, Coe states her intent to let this approach have a rising-tide effect, defining everyone better to the shared benefit of the central male figure.

I am not sure this book hits that target. While clearly the work of an energetic writer and historian eager to share the fruits of her research, it never really presents a core thesis after its introduction — except, perhaps, in the way it unapologetically elides all the stuff that the “thigh guy” books drool over. All the glorious (and often losing) battles of Washington’s Revolutionary career get reduced into a single table of locations and outcomes, with the author far more interested in their personal effect on the general, his colleagues, and his family.

You Never Forget does, however, bring deep detail to one confrontation, early in its subject’s life. At the Battle of Jumonville Glen, a hotheaded young Lt. Col. Washington led a group of his fellow British soliders and allied Native Americans to ambush and massacre a French encampment, despite having orders to merely assess and communicate. Coe portrays it as a fiasco, while Wikipedia’s sources (I see in a skim) feel less certain about its intent-versus-outcome. Either way, the attack directly sparked the French and Indian War, a fact I had no inkling of prior to reading this book.

One gets the impression that Listen to this! I had no idea, did you? is, in fact, the book’s operating principle, as it presents in a series of short chapters — with frequent breaks Buzzfeed-ready bullet-lists — chronologically ordered facts about (and, frequently, letter-excerpts from) Washington’s life that exist outside the realm of popular history or national myth. We see the forces, even lightly sketched, that transformed Washington from an impulsive warfighter to a more subtly ambitious family man. The love of Martha and her children (he never fathered any himself; I had no idea, did you?) helped temper him into a more reserved general, and finally a president extremely aware that every action he took would set precedents, and who acted accordingly.

The most provocative of these normally unlit historical threads, and one woven through You Never Forget, involves the hundreds of enslaved people who lived on Washington’s farms. It’s hard to hear and easy to wave away, to one who grew up with a typical 20th century American education. Coe’s book isn’t about these slaves, but the author nonetheless keeps their presence known throughout. Named and given voice as much as records allow, they step on-stage from time to time, quietly but consistently making their existence undeniable. Eventually, the reader stops denying it. The book ends with a lingering shot of modern historians examining the slave quarters’ unmarked mass grave behind Mount Vernon, withholding an American creation myth with a morally clean finish.

This led me down many contemplative paths I still tread, days after finishing this book, and that’s all I could ask from such a slim volume.

Previous post: Historical games should not flinch from history