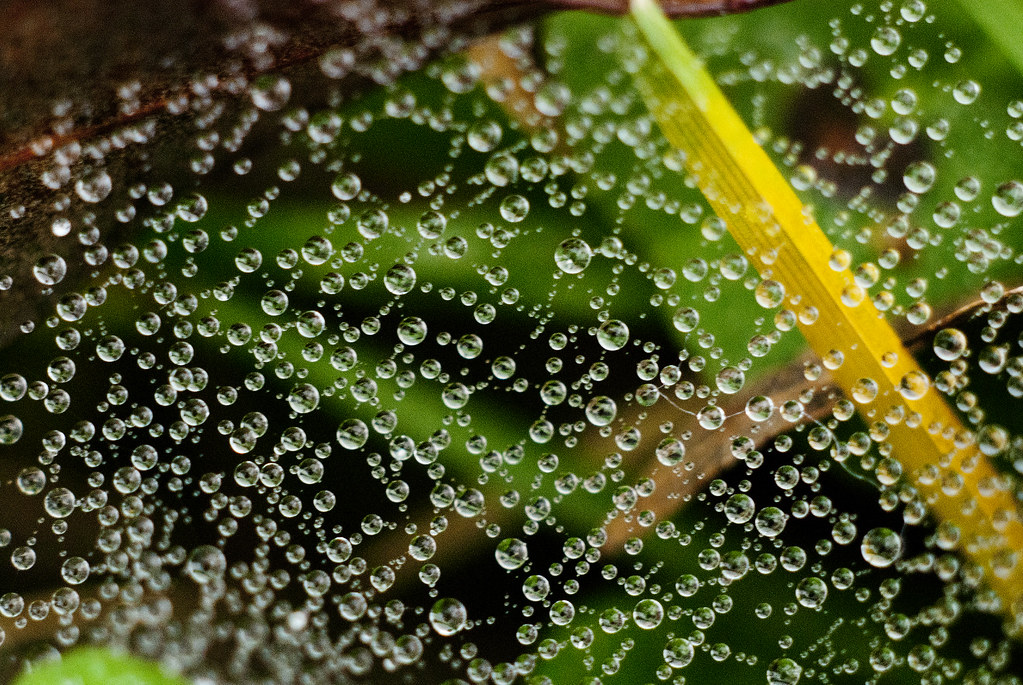 “Spiderweb/dew lacework” by Richard Nix is licensed under CC BY-NC 2.0

Among the changes of personal perception I’ve picked up from my ongoing reading of Alan Watts is a remedy against my natural inclination to feel jealousy or resentment at most anyone else’s success or popularity. When these feelings bubble up now, I can usually massage them away with an easy and quick mental shift, like the subtle adjustment of the eyes that changes a Magic Eye picture from an angry fuzz into a meaningful image.

The trick stems from Watts’s core lesson that a person is something larger than a solitary ego, wrapped up in “a bag of skin” that provides an impermeable barrier against the external world. Watts generally offers two ways to arrive at this conclusion: one embracing eastern religious traditions, and the other more pragmatic one that still arrives at the same end of seeing oneself as an expression of a system.

In Watts’s Buddhist/Hindu syncretism, every person, animal, and object in existence is literally an iteration of a single divine being, putting on a cosmic play with every role assigned to itself. As an ultimate exercise in method acting, it always blasts itself with amnesia before taking the stage—in large part because it’s more fun that way. This is the basis of contemplative-but-playful works like Everything.

For folks like myself, who can appreciate the beauty of mystical cosmologies without necessarily feeling called to participate, Watts offers a more general and secular alternative. Accept, first of all, that you are not some sort of intruder into the world, but a product of it. You can take this literally: as a human being, your body is optimized to live on planet Earth, and evolution has constructed your brain to thrive on connections with both your fellow humans and other aspects of your environment. From there, let yourself slide down a chain of linked and-therefores, which land you at an inside-out version of the starting point: you are, in fact, an expression of the world. And so’s everyone else!

One can make this philosophy even drier by replacing “the world” in these squishy equations with “human civilization” or even just “society”, and it works no worse. Even at this remove, Watts encourages us to see individuals as a conspiracy of the society that birthed, shaped, and never stops shaping them. Indra’s Net again: every node reflecting every other, a Celtic knot of beautiful strange loops, all intertwined in every direction.

I can’t hold this infinitely self-folding perspective in my mind for very long, but I find that I can steal glances at it, now and again. And this is precisely what I do when I feel a pang of negativity about some accomplishment by one of my fellow humans—whether simple envy, or a more complex distress at my own lack of activity in comparison. I can convince myself, just for a twinkling flash, that I have contributed to the same human society that has enabled the other person’s success, and my sourness instantly flips to pride, and even delight.

Don’t mistake this for solipsism! I don’t dig down to the level of “Wow, I did that!” Credit remains a concept at the individual level. When my right hand reaches out to stroke the soft fur of a housecat, it is only the nerve-endings on my right hand that get to fire; my left foot can claim no role. But just as hand and foot belong to a larger project whose totality can appreciate the pleasure of petting the cat, so does an easily accessible sense of connection to a larger society make it much easier to feel sympathetic joy in the accomplishments of any one of my fellow humans.

I may well have primed myself for this way of thinking via my day spent as an election worker last month, a 16-hour immersion in community that, when it was all over, felt like a kind of civic baptism. I emerged from it raw and glowing with an awareness of connection to my neighborhood of an intensity I have rarely felt before. And perhaps that, in turn, could only happen after eight months of pandemic-induced societal privation.

I hope that 2021 brings the healing we all need, so desperately. It will come through the efforts of amazing people who are not me. I am ready to make way for them, singing, and folding the joy of their accomplishments into continuing to do whatever it is I do.