Sometime around 2014, I acknowledged my move from Boston to Rhode Island by adopting a new avatar for my various online interactions. It looked like this: 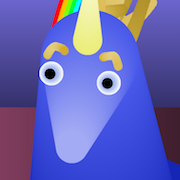 This fellow represents the output of “Unicornify”, a program by Benjamin Dumke-von der Ehe, when fed my email address as input. The program accepts any hexadecimal number of up to 64 digits, generating from it a remarkably expressive googly-eyed balloon-animal unicorn trotting across an otherworldly grassland. Here is another example, from a random sequence I just now typed in:

I discovered Unicornify by way of some link-du-jour site long ago, and quickly saw how my email address (after conversion into hexadecimal) resulted in that strikingly close-up portrait of a purple dude, its ping-pong-ball eyes looking quite pensive, while a rainbow shone subtly among the golden noodles of its mane. I embraced it as my new online representative immediately.

You can play with this too, I should add! While the open-source repository that once held the software went offline some time ago, a web-based Unicornify service still runs, though it can generate pictures no more than 128 pixels high. And if you simply wish to see a lot of example output, you can wade through the @UnicornOfTheDay Twitter account.

By the time I moved to New York, the purple dude had started feeling a little long in the tooth (lack of apparent mouth notwithstanding). And so—exactly one year into the present distraction—I announced on Twitter my desire to hire an artist to redraw the critter. While needing a change, I had also come to feel attached to the otherwise unnamed unicorn. Not as a “fursona” or true alter-ego, but more of a calling-card, or a coat-of-arms, or even just a logo, without quite being any of those things either. I wanted to preserve its spirit but gift it with a new form, for a new chapter of my life.

I ended up hiring the comics artist Flynn Nicholls, on the recommendation of a friend who’d worked with him before. After confirming that he was currently open for small-potatoes commissions like mine—always ask first!—we traded some ideas around via email, and out came the following majestic creature: 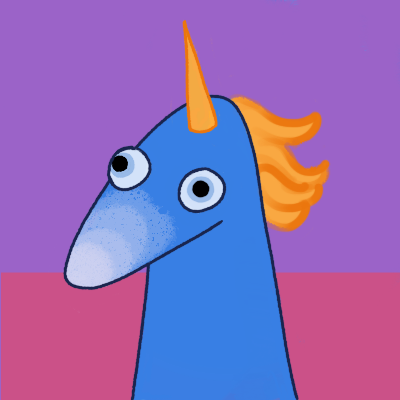 Not what I expected to end up with, when I first got the idea to seek an artist, and that makes the beauty of it all the more profound. The new purple dude looks so wonderful when shrunk down to icon size, and I have allowed it to slowly hoof its away across all my networks, personal and professional.

I could not be happier with this outcome—and it would not shock me if, over time, I begin to gather an entire herd of bug-eyed equine representatives, drawn by many hands.