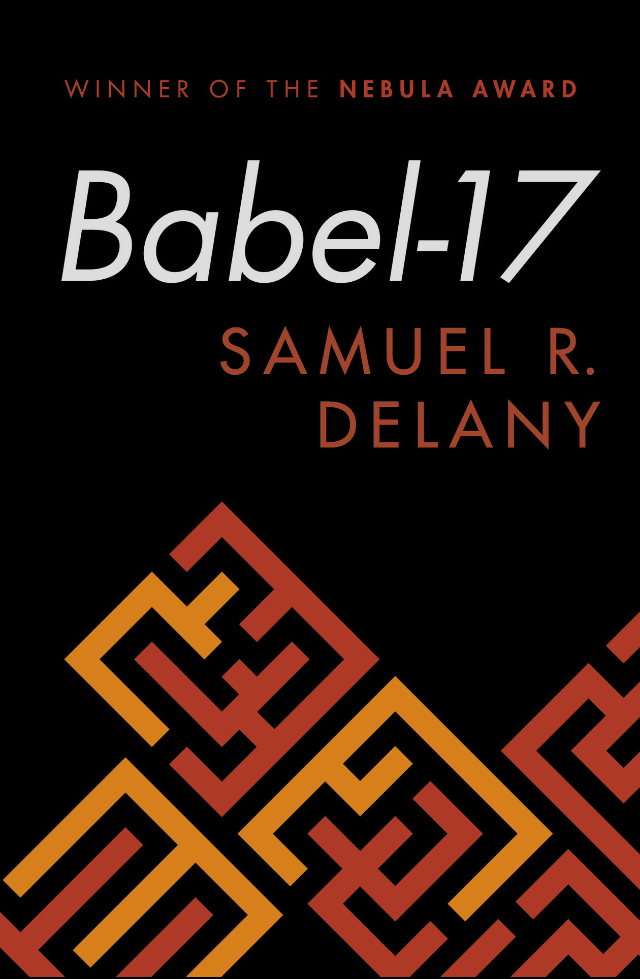 Babel-17 was my first Delany novel, and long overdue. I liked it a lot!

From the start, it reminded me of the Wachowskis’ Jupiter Ascending in the best ways. I have no doubt at all that Delany himself knew the difference between a star and a galaxy while writing this book, but the book itself does not split any such hairs. Such intentional confusions laid down early on set a tone of wondrous and unworried exploration of a deliciously strange universe.

Protagonist Rydra Wong fits a hypercompetent character archetype that doesn’t usually interest me. But in this case, I found myself quite charmed by the played-straight absurdity of her expertise: a poet of intergalactic reknown, a preternatural empath, a stunning beauty, and an ace starship captain, all while qualifying for a “30 under 30” list. With a name I only now realize might be a play on “right or wrong”, she blazes a trail that Buckaroo Banzai would follow almost two decades later.

Hired by the Handwavy Space Navy to research an alien language linked to interstellar sabotage, Rydra assembles a crew to find answers among the stars. She gathers this crew over a single night of wild partying, climaxing in a sort of bathhouse-arena where she chooses the best pilots after watching them struggle sweatily in nude zero-gee grappling games.

This book was written in the mid 1960s and it’s fantastic.

By the next morning, you see, she has built a crew utterly posthuman in both their individual physicality and their mutual interrelation. If I comprehend correctly, spaceships in Rydra’s world are powered by the lovemaking of bisexual thruples. The bulk of any crew comprises a platoon of rambunctious teenagers overseen by a nursemaid whose name is always “Slug”. And, naturally, the ship’s sensor array is run by a trio of discorporate entities, whom the book’s world refers to as merely “dead”, complete with a penchant for gothic imagery. I understood the author as doing his best to describe mind uploading without either himself or his 1966 readership having a ready vocabulary for it.

Once the plot really kicks in, and we start learning more about the mysterious, eponymous alien language, the more recent science fiction story that this novel foretells shifts solidly to Ted Chiang’s “Story of Your Life”—best known as the basis of the film Arrival. Babel-17, the language, is a hyper-compressed construct that can express staggeringly complex ideas in a handful of symbols. (I assume that Delany took inspiration from real-life “philosophical language” experiments of yore.) As Rydra teases its grammar apart, she starts to think like its speakers.

But unlike the gradual, emotional revelations that Arrival’s heptapods bring, thinking in Babel-17 gives you superpowers by overclocking your brain and helping you see the patterns undergirding all of reality. Rydra, caught in a net-like trap, touches it just so and it unravels. Later, she applies the exact same principles to break through a metaphorical net of attacking enemy spaceships. But, of course, doing that too much is bad for a merely human brain, and none of this gets her closer to her goal, so that’s her work cut out for her. And even though her ultimate discovery becomes arguably one of the few truly dated facets of this novel, I still found it satisfying and delightful.

The 2014 edition I read appears to be part of a set of Delany reprints by Open Road Media, each with an attractive cover by Michel Vrana and a lengthy, uncredited biography of Samuel R. Delany’s whole life and career so intimate in tone that I wonder whether it came from the author himself. All the books in this collection are well represented in both of the public libraries I have ebook access to, and I shall not hesitate to continue my explorations through them.