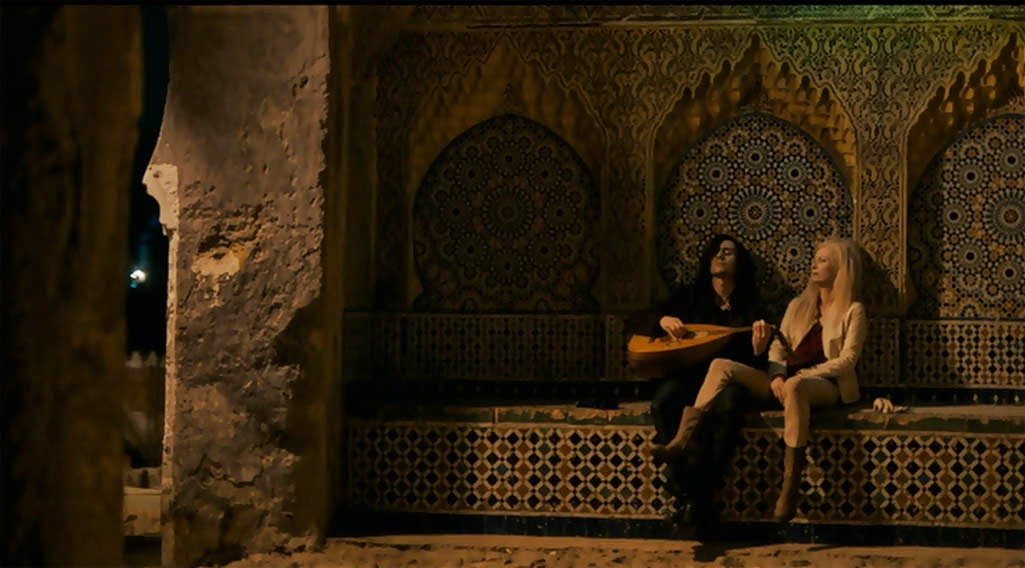 What a pleasant surprise! I knew next to nothing about this 2013 Jim Jarmusch picture, now streaming on Amazon’s Prime Video. But I was in a good mood after watching Orlando through the same channel, and felt open to a subsequent evening’s giant step 20 years forward in Tilda Swinton’s acting career. I didn’t even know who co-starred—a delightful discovery, given my household’s recent love for Loki.

Prime tags it as “Horror”, incorrectly. Only Lovers Left Alive presents a romance of that rare sub-type depicting two people already in a mature and healthy relationship, which they draw upon to support each other through a shared crisis. In this case, the two people happen to be vampires. That’s merely the spoonful of sugar that keeps the medicine from clotting, as far as I’m concerned.

Only Lovers gives us an engaging story told with style and subtlety, with a secondary theme of entangled particles tunneling through the whole runtime. This starts directly with the opening shot: the protagonists “Adam” and “Eve” spinning and counter-spinning in their respective lairs on opposite ends of the earth, linked by the coincidence of the same vinyl record spinning for both of them.

The movie explicitly invites us to wonder why the two live so far apart from one another, going as far as having a third character ask it out loud as they make plans to reunite—and then it declines to give us a definitive answer. Instead, the film leaves it as an exercise for the viewer’s emotional intelligence, given what we learn about these two characters during the time we spend with them. I really liked this.

I got the impression that Eve and Adam have grown long used to swinging in these cycles, together for a time and then apart again, and that this oscillation lends their supernaturally long relationship stability. Then again, maybe the fantasy element needn’t come into it: I have an entirely non-vampiric couple of friends who also love this movie in part because they felt seen by this depiction of two people wholly entangled, and yet who seem to thrive best when given a degree of separation.

We might also conclude that trouble manages to find these two bright souls more easily when they burn together, even briefly. One of the compounded crises that the pair faces in Only Lovers concerns an uninvited houseguest, an estranged member of their vampire clan, who—quite unlike the protagonists—plies her charm and beauty* in the manner of a pathologcial narcissist, entirely selfish with neither regard for others nor expectations of consequences. I quite appreciated this implication that even fantastic blood-drinking vampires would have to deal with the problem of entirely realistic attention-draining vampires, just like the rest of us.

This article was also posted to the “movies” section of Indieweb.xyz.

* All the vampiric characters are stunning, of course. Swinton and Hiddleston are both achingly gorgeous here, and even John Hurt’s wizened and infirm old vamp looks fantastic.

Previous post: If a game lets you pause, it should let you rewind