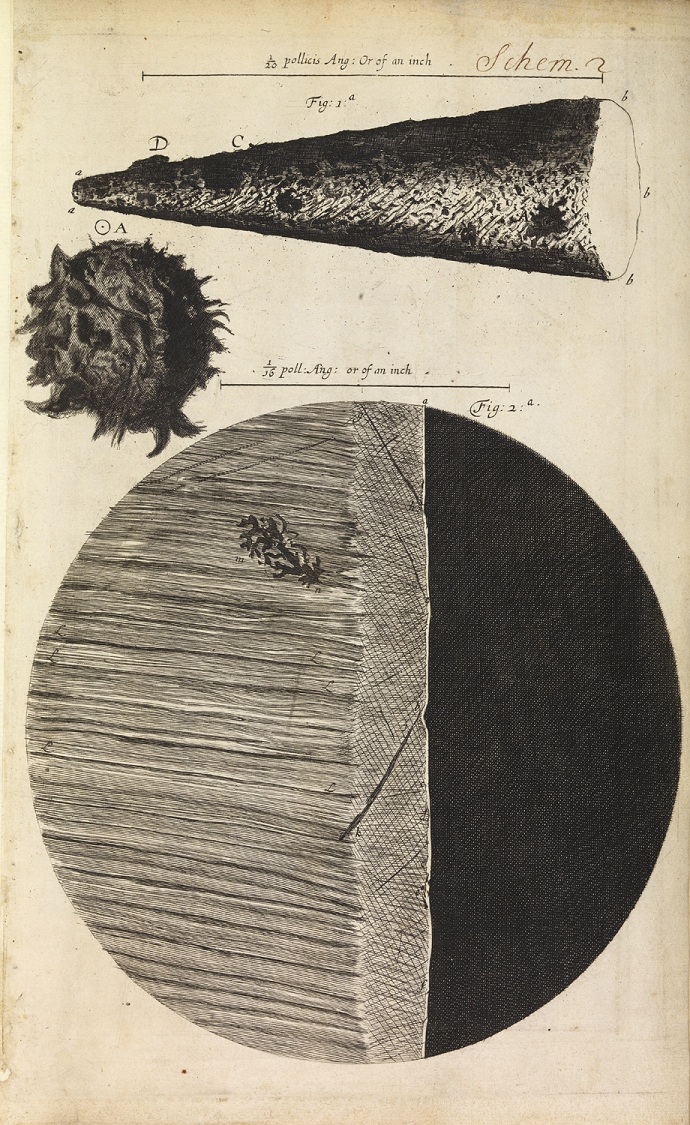 The first chapter of Ed Yong’s I Contain Multitudes, which I read late last year, reviews the start of humanity’s study of microorganisms, made possible with inventions like Leeuwenhoek’s microscope. These new technologies inspired the naturalists of the day, such as Robert Hooke, who dove hungrily into this new science of looking very closely at tiny things. Yong relates how Hooke gave a series of celebrated lectures on the topic for the Royal Society, which he later collected into a book titled Micrographia; the author noted in particular its beautiful and groundbreaking illustrations, drawn by Hooke himself.

Okay, thought I, and followed my impulse to pull out my phone and see if Rhode Island’s library system had a copy, and I’ll be damned. So some days later I brought home this small but heavy volume, a 1960s reprint on oddly thick, smooth paper of a 1920s edition which in turn precisely replicated the printing of something centuries-old, not re-set into modern type but preserving the block-printed appearance of an ancient book. Old enough for utterly unironic use of long esses throughout its text, and something else I’d never seen nor heard of before: every page ended with, in the lower-right margin, a preview of the next page’s first word. A checksum to help the book-binder get all the pages in the right order? I have no idea.

All of which made for quite a challenging book to actually try reading, so I approached it lightly, taking it only the gist of Hooke’s prologue and the text of his first couple of illustrated presentations, and then just content to flip through the promised pictures. With delight, I was able to extract Hooke’s spending many pages arguing that the reader accept the efficacy of the scientific method, of the value of creating new knowledge based on observation and experimentation — rather than merely faith, “common sense”, or received wisdom. This implied that this approach, which we learn today as essentially as eternal as science itself, held an uncertain novelty to the book’s learned contemporaries.

After that lengthy prologue, I unpeeled enough of the equally dense text around his first couple of illustrations to appreciate Hooke’s desire to punch up his topic by applying a narrative order to it. The first object he illustrates and describes is the tip of a pin, and the second is the edge of a razor — neither one the compound fly-eyes or finely haired flea-legs that inevitably serve as the book’s cover-worthy images. Hooke starts here, he writes in so many words, because he enjoys the idea of starting with objects that a reasonable person of the day might assume are manifestations of a geometrically perfect point and line, respectively.

Hooke then relishes his reveal, in both cases — not so! See: the microscope shows stunning imperfections in both. Under the apparatus, the pin-point appears as a crudely blunted mound, containing pits large enough to house bits of dust. The razor becomes a mere wedge, holding no more Pythagorean perfection than a door-stop. Both objects boast innumerable warps and scratches, all spotted with rust. The ineffable rendered ordinary, three-dimensional, and subject to the same mortality as all else on earth.

And that’s as far as I got. Really reading this book would require more study than I know I could reasonably give a book that my library card allowed me to keep for only a few weeks, so back in the return-bin it went. Still, a delightful adventure in chasing 17th century references in a 21st century book at a 20th century pace.