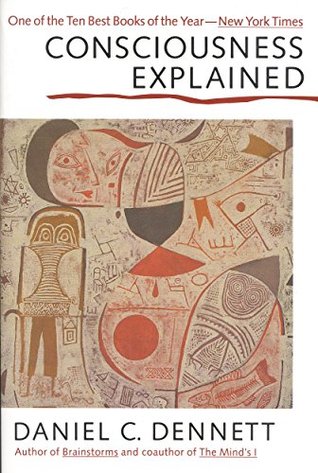 This book took me twenty years to read! I bought it while living in my very first post-graduation apartment in Bangor, Maine, probably from the wonderful giant borg-cube Borders out by the mall. I would start to get into it again and again over the years, but never made it very far. This most recent and at-last successful sortie required this blog to exist, I reckon. I hadn’t thought about Consciousness Explained since starting to record my reading in public three years ago, but then its author tweeted about it — surprised to find the 1991 publication heading a new best-books list — and set my course.

So, does it explain consciousness? Well, not really, no! Rather, it provides a novel lens for thinking about how the mind might work — in humans, animals, and constructed intelligences yet to come. Dennett introduces his multiple-drafts model, in which consciousness arises when the output-flows of various lower-level neurological processes, analagous to daemons in a computer system, exist in sufficient number and variety that they chord. These mental data-streams flow and resonate into each others’ inputs, creating feedback loops of such wonderful twistiness that — though no fault of their own — build an enormously complex super-process that can reflect upon itself.

I’ve run into this notion before in books written after this one, most notably 2007’s I am a Strange Loop, by Dennett’s cognitive-philosophy colleague Douglas Hofstadter. Consciousness Explained does not glory as much in the concepts of self-reference and feedback as Hofstadter’s work; under Dennett’s theory, the self is less a hall of mirrors than a “center of narrative gravity”, and boy do I love that idea.

Under the multiple-drafts model, consciousness is an ongoing narrative under constant revision based on a pandemonium (to use the author’s own preferred word) of low-level sensory and cognitive processors. We creatures who possess consciousness also possess a notion of self in the sense that a physical object has a center of gravity. In one sense, a fiction: the gravity of a body isn’t really all mashed down into a single point within itself. But we can treat it that way anyway for convenience’s sake, and the math all works just the same, and thus we can do physics. Likewise, I can act as if “I” am concentrated within a single point of observation — my soul, my pineal gland, whatever — and it’s true enough to let me enjoy its benefits and get on with my life.

Alongside these novel ideas, Consciousness Explained spends the bulk of its energy tearing down other theories. For every assertion this book makes about multiple-drafts theory, it makes many more attacking every reigning (as of 1991) or “common-sense” notion of consciousness, to the point where the whole thick book seems mostly an act of demolition against the set of assumptions that Dennett derisively calls the “Cartesian Theater” — the comfortable notion that consciousness works something like a deliberately constructed film that somehow observes itself (or is observed by a separate “self”). The book made me receptive to the multiple-drafts model of consciousness as a beautifully fragile emergence from many overlapping and otherwise dissonant mental subprocesses, but I ended my read feeling unsatisfied, witness more to the author blasting away at rival hypotheses — however convincingly — than exploring the implications of his own.

I did have some hesitancy going into this, since wouldn’t everything be terribly out of date? But, no, of course not. While Dennett writing in 1991 had access only to research published before then, it was still all new to me as a layperson, and I found the book’s many summaries of past experiments quite fascinating in their own right (and apart from Dennett’s invocation of them as either supporting evidence towards his own theory, or misleading paths away from it). Moreover, despite a quater-century of global scientific advancement, the true nature of consciousness remains a mystery without a consensus explanation. Laboratory-reproducible illusions such as the color phi phenomenon, oft-referred to by this book, still see their experimental subjects report physically impossible observations today, with no tidy reason as to why.

Earlier this year, in fact, I read (again via the author’s Twitter feed) a 2017 paper by Dennett attacking the popular cognitive-philosophy notion of qualia. It amused me, then, to only a little later discover his 1991 book having an entire chapter titled “Qualia Disqualified”, engaging in more or less the same battles — only with the philosophy-journal articles of the late 1980s, rather than those of today. I’ve brought this up with a couple of friends, a psychologist and a philosopher married to one another, and they assure me: Oh, this is quite normal for any sort of discourse in these fields. And — ha! — just now reviewing my 2015 post about Dennett’s Freedom Evolves, I see myself making the very same somewhat exasperated observations there, about both that book and Hofstadter’s later works. I referred in that article to my not having read Consciousness Explained yet, and seemed to assume that it somehow stood apart in this regard. Sorry to disappoint, past-self…

Dennett himself admits, in the book’s closing chapter, that he could do no more than introduce multiple-drafts theory. It falls to me, I suppose, to see if it has developed further in the intervening years. In the meantime, I have already found it a valuable way to view certain phenomena around me, increasing my appreciation for the ways that a single apparent stream of order can emerge from many chaotic processes. I’m glad I finally read this.