I watched Existenz (after dreaming about it)
August 30, 2018 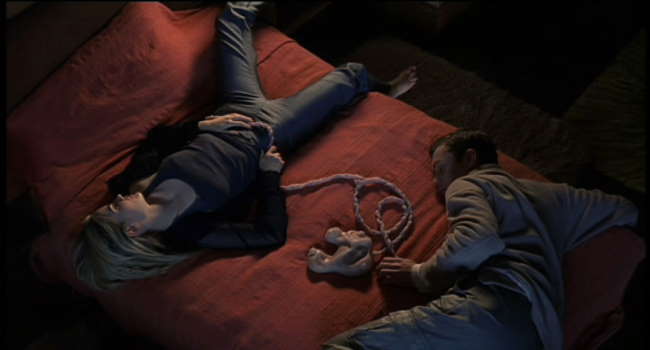 One morning several weeks ago, I awoke from a dream where I learned that the director of the 1999 film Existenz — which I had not seen, and whose principals’ identities I did not know — had, in secret, produced a follow-up film trilogy and released them all at once. The whole world loved them, and while my dreaming self hadn’t watched those either, just knowing that this had happened made me feel suffused with light.

I shared this story on Twitter, and enjoyed a rare sort of small and pure joy that used to be quite common on social media. My story received perhaps the most positive reaction an untrammeled dream-relation of mine ever has, with friends calling out the bits from the real picture that they liked the best, and one stranger informing me in all caps that David Cronenberg directed Existenz, inveighing me to march out and absorb that man’s whole ouvre with haste.

(“I did see A History of Violence,” I offered in reply. “I did not like that movie,” said my new mentor, whose user-icon was a screaming skull wearing a brimmed hat. “See a different movie immediately.” The high point of my week, this may have been. See, friends, I-statements are how it’s done.)

After all that, of course I felt guided by angels to experience the movie within my waking life. Obtaining a copy via my local public library, I found the film short, very weird, and quite delightful. Any one-sentence summary of the story you’ll find online — A video-game designer (Jennifer Jason Leigh) becomes trapped in her own virtual reality when something something blah — will not do the film justice. Existenz takes a classically McLuhan statement about the mingling relationship that late twentieth-century humans had with mass media, expressing it with joyfully and horribly direct visual metaphors. Within minutes, the film uncoils McLuhan’s theories of media as extension of the bodily senses via extremely Cronenbergian practical effects, in the manner of the thickly blue-veined umbilical cords that dangle from the fleshy “game pods” that residents of the movie’s world tote around in vanity carrying cases.

Contrary to the advice of my new Twitter friend, I did not watch Videodrome first, and indeed still have not watched it. I therefore cannot speak to the common critical wisdom that Existenz serves as its natural followup, transferring the focus of its metaphor about bodies and media from television to video games. I can say that to a new viewer looking back from two decades on, I startle instead at its casual insight about video games’ future, both culturally and on the design level.

To hear my timeline tell it, the film’s most memorable prop is the gory “bone gun” that appears at key moments; in one scene, Jude Law’s character assembles it from the gristly leftovers of an extravagant meal*, using his teeth as its ammunition. He proceeds in a half-trance, watching his own hands with fascination, commenting that he’s just letting his in-game character lead the way. A game-studies friend commented that an adventure game made contemporaneously with the film would have turned this into a obtuse puzzle (probably unsolvable without the official, sold-separately hint book), forcing the player to manually figure out how to turn a dish of mutant squabs into a deadly weapon. A game made 20 years later, though, would more likely offer an experience much like the one from the film, perhaps reducing it to a well-prompted quick-time event: Press X repeatedly to devour the meat, turn the right stick in a circle to twist the neck off, slide the left stick up to snap the rib-cage into place…

More unsettling for the modern viewer, Existenz anticipates Gamergate by a full fifteen years. From almost the first scene, Leigh’s character is menaced by players of her own video game — all young men — who denounce her as a “demoness” and try to kill her. It takes no effort to imagine this movement of so-called “Realists” marinating angrily on social media, egging each other on with their own subreddit. There, surely, they convince each other of the righteousness of their cover story — some mumbling about “warping reality” via VR games — and work out ways to terrorize anyone who dares suggest that they just hate how a woman tweaked the bullet physics on level six, or whatever. All this probably read as absurd to audiences of 1999, at least as absurd as the idea in 2014 that a reactionary movement of socially estranged and gynophobic Call of Duty fans would help bring about a global halt to American progressive leadership.

Those looking for it can also find years-ahead commentary on Bethesda-game NPCs’ uncanniness, or on the rise of the battle-royale game genre. For all this likely-accidental prognostication, though, Existenz keeps itself centered on its core metaphor of the body as ultimate media interface. The PlayStation-sized game pods get subjected to every fear facing a human body: they can contract illnesses making them bleed and shrivel, and swarms of insects can sting and harry them. At one point, the protagonists take an ailing game pod to a data-recovery specialist, who dons a surgeon’s kit and proceeds to go at it with a scalpel and forceps.

But none of that would carry true body-horror without offering the threat of connection between these fallible game-organs and the characters’ own bodies. Thus the “bio-ports” that game-players get punched into their lower backs, resembling nothing so much as herniated anuses. With access as convenient as lifting up one’s shirt a bit, characters treat us to multiple scenes of carefully lubricating and fingering each others’ bio-ports prior to jamming in their game pods’ aching tendrils. All quite startling to watch, to the point of eliciting audience laughter. But with all the movie’s other explorations of meat-literal man-and-media interfacing, ignoring the sexual aspect of bodily contortions and collisions would have seemed a strange oversight. So the film instead chooses to embrace it, penetratingly.

One of the film’s most memorable moments, though, involves neither special effects nor explicit imagery. Early in the film, Law’s character prudishly balks at the suggestion that he have a bio-port installed, verbally expressing his disgust with the idea of inserting anything inside one’s body for any reason. Leigh’s character mockingly refutes him by wordlessly opening her mouth wide, grinning and curling her tongue over her chin. A flirtatious gesture, but much less erotic than nakedly orificial; Cronenberg lights and shoots this image so that Leigh’s eyes shine over a black and empty maw. Existenz is a movie about what goes into the head, and it continues to clamp itself within mine for far longer than its 90-minute runtime.

* This takes place in a Chinese restaurant, one of a couple of scenes with a tad too much Orientalism for my modern comfort. One can generously read it as intentionally satirical, but 20 years on its implementation feels awkward, and makes for the sole element of the film that landed wide.

Next post: Rejecting the “Post-web era” while embracing The Future