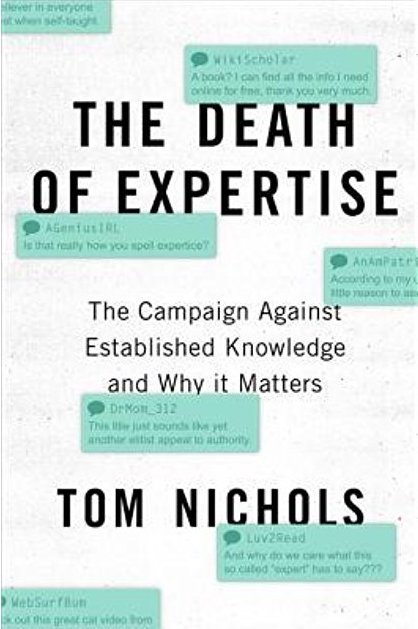 I found this sour little volume by Tom Nichols a suitable companion work to Roy Scranton’s 2015 treatise Learning to Die in the Anthropocene. While I disagreed at the time with certain of that book’s core assumptions, it nonetheless inspired me to make room in my life for quiet reflection and study of the ancient humanities from around the world, a practice I have imperfectly pursued in the three years since. Similarly, as soon as I finished The Death of Expertise I purchased a subscription to a foreign daily newspaper — adding to the two domestic subscriptions I already had, both municipal and national, and thus implementing for myself the advice that Nichols gives his own students for broadening their daily intake of well-edited media.

This advice, granted, comes in amidst a sense of near-hopeless futility regarding its own aims. In the very paragraph containing the instruction, Nichols all but dismisses the students he delivers it to as spoiled brats who will almost certainly ignore him. This comes after an entire chapter about how higher education in the U.S. has become irredeemably broken, treating its students (whom Nichols refers to without exception as “children”) like customers paying for a rubber-stamp diploma and a good time, rather than humble initiates for genuine experts to either mould or reject.

Nichols seems aware, in writing this book, how much its tone and message slots neatly into the eternal Kids today, am I right? complaint, and how it risks dismissal on these grounds. But he persists, and I have to admit that I found it compelling. Yes, it presents a satisfyingly thorough I weep for the future argument that happens to coincide with my own allotted time on earth for middle-aged future-weeping, but it invokes some uniquely contemporary concerns in the process.

In particular, The Death of Expertise addresses the way that social media flattens all incoming messages, so that utterances from both learned experts and charismatic amateurs get presented to us as naturally equivalent. Or, increasingly, worse than equivalent, what with inscrutable algorithms always tracking our eyes and clicks and seeking to subtly emphasize more of what “drives engagement” and fires us up emotionally. This pushes into the background real news, researched opinion, and other information that that, like a salad of kale instead a scoop of ice cream, may seem harder to swallow but does us far more good. But, too late, Nichols writes: these semi-automated media platforms have a directive to keep us consuming their content, not growing as a result. And they have long since detected our affinity for soft serve.

Nichols ends the book with no advice for mitigating the great decline he perceives, or any optimism that society will pull itself from this tail-spin of stupidity. In this way, too, it resembles Scranton’s screed, smug in its surety that civilization as we know it cannot possibly survive another generation or two (though he pins the blame squarely on capitalism-accelerated climate change).

My ultimate reaction to both books, then, is similar: I extract a kernel of solid self-improvement advice from each, in defiance of their respectively nihilistic prognoses. And so I find a pleasant pairing of Nichols’ advice to improve the breadth and quality of one’s daily-news intake — turning down the noisy churn of social media and letting more vetted expertise into our lives — with Scranton’s imperative to become more conversant with deep-seated culture. I don’t do that primarily because of Scranton’s argument that this would improve human culture’s chances of memetically surviving the inevitable apocalypse. I suppose I’d have to accept that side-effect if worse came to worst, but it hasn’t yet.

Against a backdrop of despair, both authors offer compelling and complementary advice for bettering oneself through deepening one’s cultural knowledge and mindfully refining one’s intake of novelty. In the end, I can fix myself rather more effectively than I can the whole world, so I will happily recast these writers’ apocalyptic dirges as an ongoing invitation to act locally.

Next post: I am reading Wuthering Heights (and works adjacent)