Like many of my friends, I quite enjoyed the Netflix miniseries Russian Doll, a smart and engaging fantasy that borrows Groundhog Day’s template to tell a new story about the importance of interpersonal connections between grown-ups in an increasingly mad world. Entirely aside from its plot, though, various scenes showing one of the two protagonists attending a party, or inviting a friend to coffee, hit me like a boot to the backside. I… I used to do these things. My brain steamed as my blood flash-boiled with the realization that I have not been able to so casually invite any friend out to coffee in years, not since moving away from Boston to Rhode Island.

This move, made due to career necessity, had left my wife and I in a strange social limbo: we didn’t live far enough away from our Boston friends to feel obligated to make new ones, but nor did we live close enough to easily visit any of them. We have made attempts to rebalance this, in the years since. When we first came to Rhode Island we lived near my wife’s then-new job in Newport, a season-dependent island town whose essential loneliness I described in one of this blog’s earliest posts. Last year we relocated to Providence, a much livelier city — which is to say, a city at all — specifically to remedy the malaise we both felt in Newport. It let us stay within commuter-range of Amy’s job, and also nudging ourselves about a half-hour closer to Boston in the bargain.

Scored by that rubric alone, it worked! We both took to the city immediately, feeling much more at-home in the denser environment, with its great variety of cuisine, a new and interesting urban landscape to explore, and easier access to our old friends (though still a good hour’s drive away from any, assuming light traffic).

But because Amy’s ongoing career climb means that the next step up her ladder could land us anywhere, I avoided tying myself down to the city in any way deeper than that. Consciously or otherwise, I didn’t consider myself a permanent resident of Providence. I treated our apartment like a weekend rental with an uncertain check-out date, enjoying the scenery well enough, but doing nothing to risk recognizing it as my home. I sought no new social contacts, I attended no gatherings, and I visited no landmarks, public services, or regional curiosities other than the most obvious. I instead kept all my social affairs to the internet, supplemented with a visit to the Boston area once or twice every month.

This was a mistake. While I have shipped some of my best public work as a Rhode Island resident — Plerd, my tenure with IFComp, and launching the non-profit corporation I helped build around it — I did so while burning through the socially sourced spiritual fuel I had built up over 15 years living among my Boston friends, and doing nothing to replace it. By the start of this year, I’d sat utterly depleted for some time, and didn’t quite realize it. Russian Doll cold-cocked me with its frank presentation of basic social interactions I once took for granted, and in whose unwitting absence I suddenly found myself starving.

After that TV show spun my head around, I made some changes. Yes, we might still pack up and leave at any moment, but what of it? Before the show’s credits rolled, I had made a new resolution. So long as I live in a particular city — and with no definite plans lying on the table to change that — then I should plug in, working myself into all the culture made by the people who actually own up to living and working there.

So, some changes I’ve made, just within the last few month or so:

I visit Brown University’s page of public events once per week, and copy everything that looks interesting onto my personal calendar. And then I actually go to some of them. (I have so far attended a lecture on a modular fireplace that that Benjamin Franklin invented, and a presentation by a RISD professor about embracing uncertainty in goal-oriented design projects.)

I push myself to go to local live shows and entertainments. My wife gets credit here for surprising me with a ticket to black odyssey at the Trinity Rep playhouse for my birthday in January. Since then I’ve attended a little weird show of Twin Peaks-inspired music acts, and a giant radio-friendly concert at the local sports arena. Against all logic, I’ve also started to enjoy watching Providence’s minor-league hockey team play; fifteen bucks buys you a rink-side evening of socially acceptable blood-sport and a dose of regional pride.

Finally, following Russian Doll’s accidental advice most directly, I invited a couple of Providence-dwelling acquaintances out to coffee. They proposed meeting in a coffee house I had no idea existed, despite living near it for an entire year, and then we succeeded in having a conversation of such an astoundingly meandering nature that we landed upon the discovery that one of them had a fan-cartoon printed in the letters column of a circa-1990 issue of the ultra-obscure indie comic book Tales of the Beanworld, the very same issue that contained a letters-column fan-cartoon by me.

I can think of no surer sign that I had put myself upon an extremely correct path.

Appendix: here are the two pages of “Do-It-Yourself Beanworld” contest winners from that issue of Tales of the Beanworld, which I called “fan-cartoons” for sake of a simpler narrative. I invite the reader to perform their own research for further context. (Click either image to embiggen.) 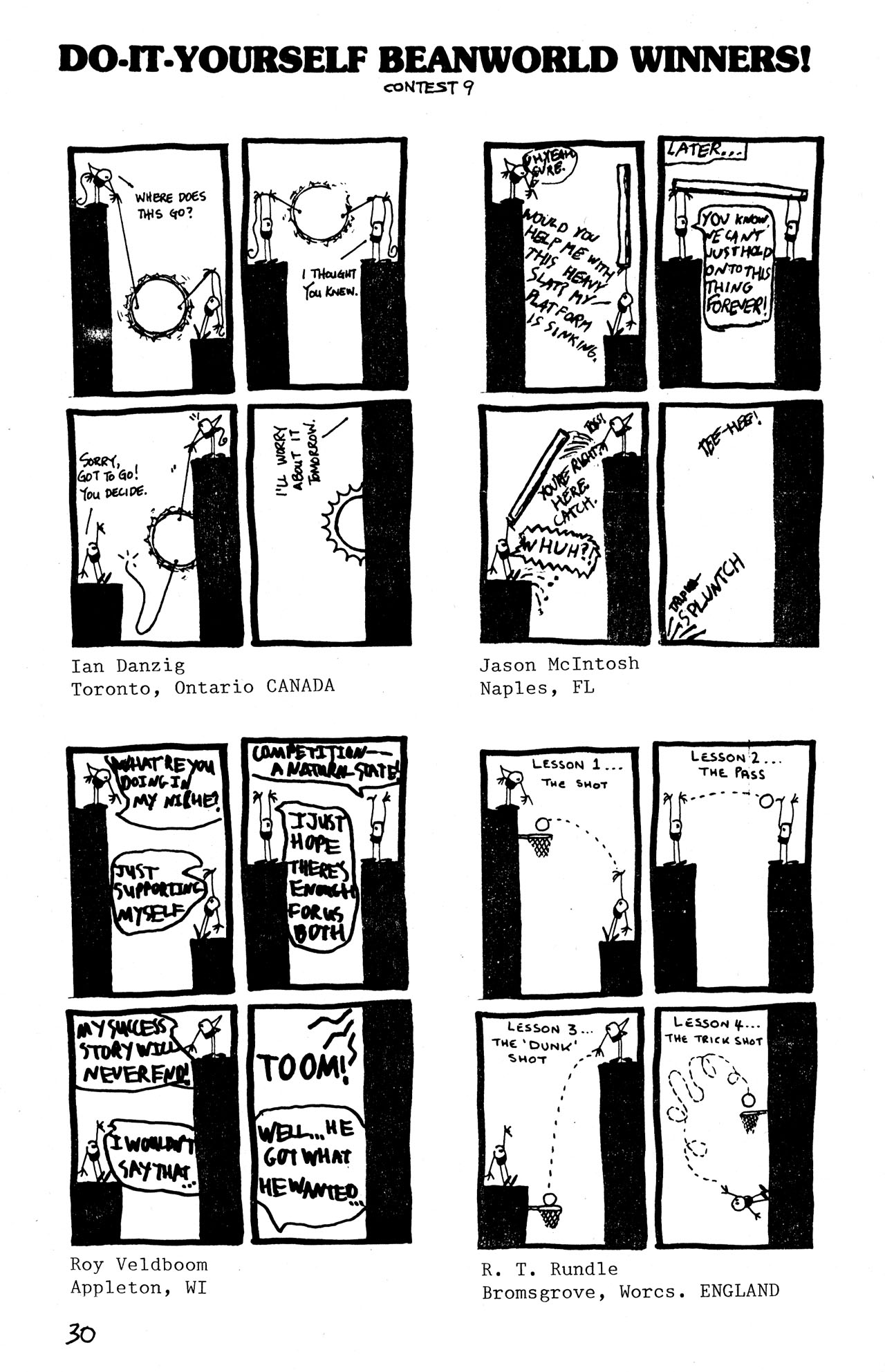 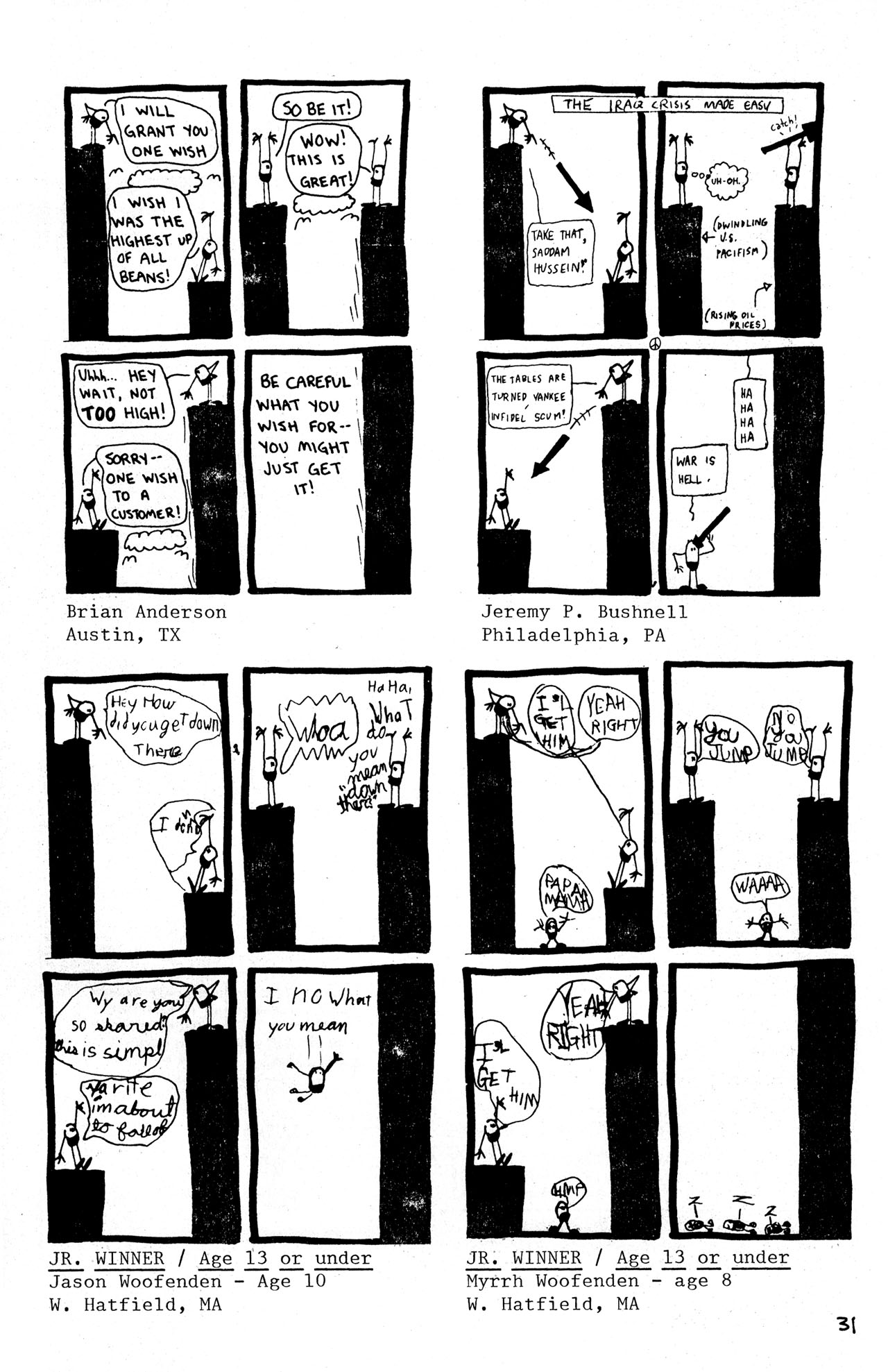 Next post: I bought an expensive chair and I love it