Shout out to @AcrosticPi. Always good for a retweet of my blog (https://t.co/enZsEQywwd) when they need a “four." 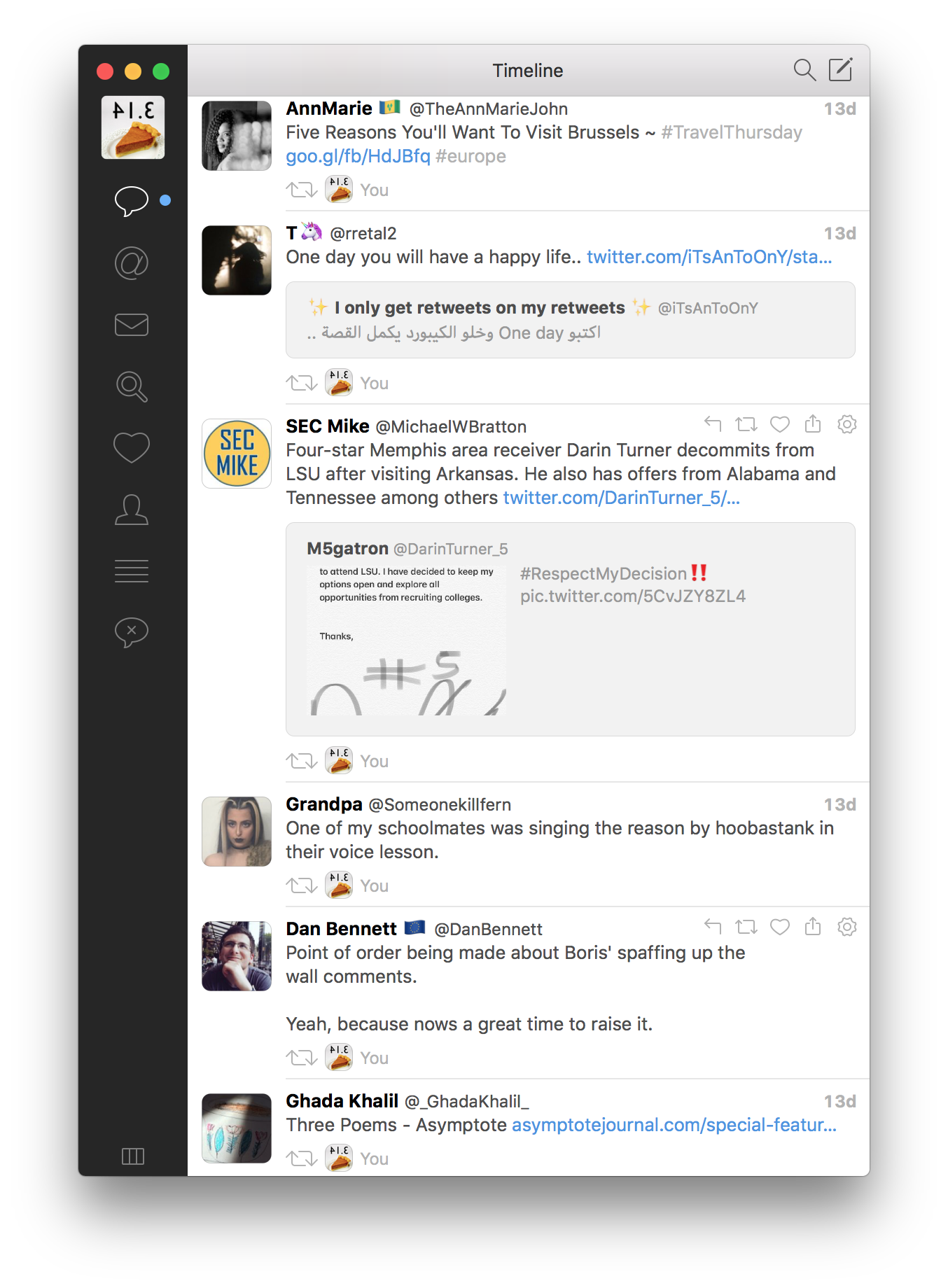 On March 14 of this year, I restarted @AcrosticPi, a twitter bot I created in 2014. As its homepage explains, it attempts to post one digit of the decimal representation of π every 15 minutes. The bot tries to make this interesting by encoding this digit via the first word of an English-language post to Twitter, potentially created by anybody, and usually only a few minutes old. (Sometimes it doesn’t find any reasonable new tweets, and posts nothing, trying again with the same digit 15 minutes later.) It also updates its own user-profile message to indicate its current position in the sequence.

I intended @AcrosticPi as a sculpture which has an obvious meaning (or, at least, a pleasing pattern), and yet despite existing wholly on social media it proves entirely resistant to sharing. Like an art installation — my very favorite kind of sculpture — you have to “visit” @AcrosticPi in its context as a full Twitter-based stream to appreciate it. You cannot effectively retweet or otherwise pull-quote any part of it, at least not while continuing to present the tweet as part of the artwork. Displaying any of its individual tweets individually reverts them to their original, default context, removing any trace of the new role that @AcrosticPi gave them.

If you want to visually share the work, the best you can do is take a screenshot of your Twitter client with some slice of the sequence loaded up, much as you might take a photograph of your experience with an installed work an art museum. Thus my illustration for this post, a grab of my Tweetbot window from late last month.

To my good fortune, the six tweets that started the sequence off this year (decimal point included!) are benign, even pleasant in tone. Unsurprisingly, this attitude does not dependably hold. As I write this, 373 accounts follow @AcrosticPi, but I am not one of them; every time I try, I find myself unsubscribing after a few days, at most. Even though its RTs bring me joy so often, they also put disturbing stuff on my timeline, the very sort of thing that would get me to disable retweets on a friend’s account (a practice I wholeheartedly recommend).

It happens that short news messages that start with a number often go on to describe some crime, injustice, or other misfortune visited upon that many people. And, not always people: the most recent trigger came from an animal-rescue group’s claim of how many poor doggies and kitties needed immediate adoption from a certain shelter, else face destruction. My stomach flipped at the uninvited emotional manipulation, and I hit my own creation’s unfollow button. Yes, sometimes this does seem hypocritical of me, putting art out into the world that I myself can’t bear to look at. It weighs on me just enough to doom me to try again, every so often. Having written all this out, all right, look, I’ve gone and done it again. We’ll see how long I last this time.

Other than recounting bloody headlines like this, @AcrosticPi does manage to avoid a lot of more obviously uncomfortable material by way of an extremely conservative language-filter, one that discourages the bot’s retweeting pornography or other NSFW content. This ban encompasses a long list of words relating to human sexuality or anatomy, and this required me to override my own deeply conditioned distaste for automated filtering. If I learned that a web forum I used prevented its visitors from writing words like “gay” or “breast”, I would feel quite disgusted with it. I came to accept, though, that neither @AcrosticPi nor its audience would either miss anything or censor anyone by giving these entire lexical categories a pass. No speech suppression can possibly happen here, not when the critter’s entire modus operandi involves taking material that others have already, successfully published, and then re-publishing it in a surprising and — yes, let’s be frank — uninvited new context.

I began writing this post just to acknowledge this sculpture’s fresh start. I’d originally launched the work prior to Fogknife’s own beginning, and so I thought I’d get an easy article out of it. But thinking about @AcrosticPi more than a little lets me discover a surprising amount of subtle depth in the output of this ridiculous little script, and ponder further directions I might take it. (Perhaps an open-mic reading of a contiguous swath of its numbers lay in our future.) At any rate: here’s to another 7.28 years of this little invention of mine continuing its absurd recitation of everyday joys and horrors, bound to the dance of an infinitely irrational cosmic constant.

Previous post: The most cyberpunk thing I’ve ever seen