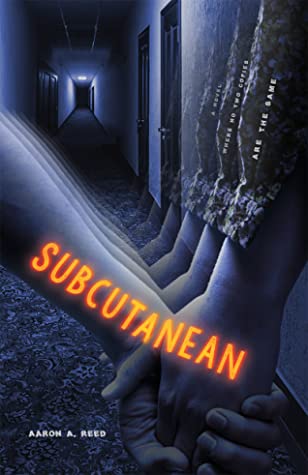 Owning a copy of Aaron Reed’s Subcutanean means possessing one vertex of a vast textual sculpture that encompasses its entire print run, past and future. What appears at first a technological gimmick becomes, in the act of reading, something far more impressive: a twisty horror novel that folds back not just on its own structure, but the entirety of its own presence in the world, realized across many published copies.

Subcutanean wears its gimmick on its cover: a procedurally generated novel, printed on demand, with no two copies alike. All the books nevertheless tell the same story, a meditation on the terrible uncertainties intrinsic to an intimate two-person relationship. The procgen-engine that knits each copy together, based on a unique random-seed number (mine used 36619, according to its spine), twiddles with various story-details. According to the end-notes of my copy, for example, “my” protagonist had a troublesome predilection for booze not present in all of his iterations. He made a few decisions differently, for this reason and others, and this affected the mysterious geography he explored, and the path taken by his thoughts therein. But the overall arc of his story remains broadly similar to that experienced by all his namesakes across every printed copy.

A work of fantasy-tinged horror, Subcutanean deals with metaphors of parallel universes and mazes of possibility made real on two levels: in the fiction the lost characters inhabit, and in the reader’s world, which contains indefinitely divergent copies of the same book. And I found it a good, creepy story — a real page-turner that I soaked up in just a couple of sittings! I often feel that I lack the fascination for procedurally-generated or emergent-narrative systems that so many of my friends and colleagues have, so it took some months of observing other folks’ reactions to this novel, all hinting at its uniquely, impressively self-descriptive nature, before I finally joined Orion in the unnerving task of exploring the maze of twisty little passages under his house.

Reed’s background as a text-adventure game designer shines through as much as his scholarly devotion to procedural-narrative experiments. Prior to this novel, the Reed work I had the most familiarity with was 2009’s Blue Lacuna — among the largest traditional parser-driven adventures ever published. (And a damn good game that I spent at least a week or two with, if memory serves.) The bulk of Subcutanean takes place in a fantastic space that quite clearly comes from a mind used to envisioning vast underground spaces divided up into discrete rooms, connected by doors and corridors of every description, and setting up all sorts of puzzles involving darkness, quantities of rushing water, and various lengths of rope. I certainly don’t think one need be an aficionado of Zork-likes to appreciate the correspondence, but the glimmer of recognition amidst all the strangeness made the journey a little more fun for me.

The novel’s horrific aspect keeps one from getting too comfortable, of course, and I felt especially interested in the particular interpersonal tension it explores, one I don’t recall seeing explored much in recent fiction: the imbalance inherent in a deep friendship between two men, one openly gay — the protagonist, Orion — and the other nominally straight. (And, of course, both young enough to make believably cringeworthy decisions.) Through the serpentine labyrinth of criss-crossing realities that Orion finds under his basement, and before we can arrive at a graceful ending, the novel examines the rewards and the risks of the main characters’ relationship by exploring some shatteringly extreme ways it can go awry.

I always appreciate the use of horror to show the best of human nature by casting it against worst-case (and sometimes supernatural) counterfactuals, and I have seen this applied with great effect to various family and friend structures in other work. The nature of Nico and Orion’s intimate friendship, and the electric current that both powers it and threatens it like an ever-present third rail, also drives this novel and its many-worlds hook. I completed my journey through Subcutanean’s subterrarium feeling like I’d been allowed to see at least two explorations in text I’d ever experienced before. I have read only one iteration, and feel quite satisfied to leave it there for now. I can easily recommend this novel to anyone who enjoys a meaningfully creepy read.