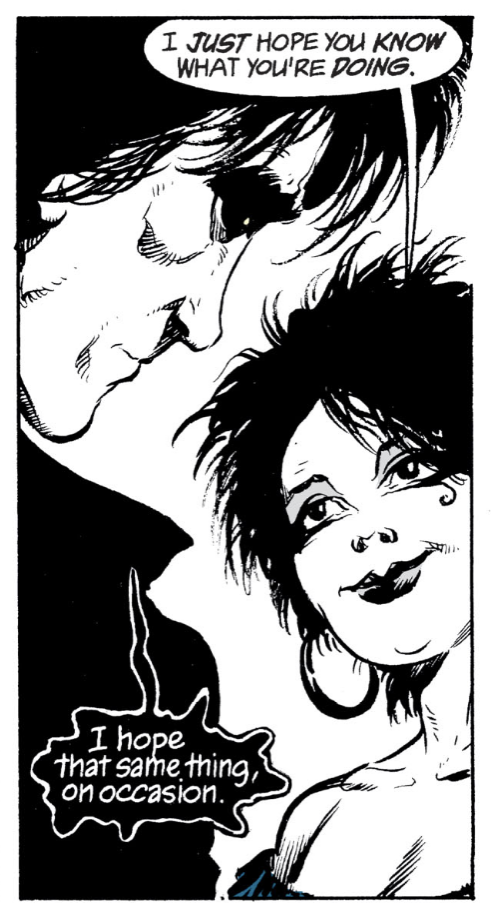 Continuing my personal and subjective experience of listening to Audible’s radio-play adaptation of The Sandman. This post breaks into Act II, released in late 2021, adapting more than twenty Sandman issues from the early 1990s—including the point at which I first started reading the monthly comics.

As before, I aim only to present responses, not reviews. I do my best to avoid major spoilers.

Where Act I contains Sandman stories I felt deeply familiar with, Act II starts to cover ground I didn’t know nearly as well. Of the two major story arcs adapted here, Season of Mists occupies a liminal space in my relationship with the original comics, while A Game of You is both very special to me but also barely remembered, for reasons I will eventually explicate. I ended up preparing myself for the listening of either one in very different ways, which… well, I’ll get to that too.

A bit of self-discovery I made with this listen: I enjoy most of the one-issue Sandman stories more than any of the long-form story arcs. I certainly find a half-hour, self-contained radio play much more satisfying than an hours-long epic that spans several listening sessions, so I wonder how much of this reaction comes from the Audible production retroactively coloring my appreciation of the comics. But I feel pretty sure it’s true anyway.

The production quality of Act II suggests that the radio adaptation’s creators spent all their star-power budget on the actors voicing the stories’ fantastic characters: the Endless, the Norse pantheon, the hordes of Hell, and so on. But after Season of Mists, Act II largely stars ordinary human characters, relegating the gods, angels, and immortals to the wings. And with notable exceptions, the skill and range of the actors voicing these mortals drops from exquisite to merely cromulent. Nothing to really complain about—I still feel so happy this adaptation even exists, and produced amidst a global pandemic, yet—but still noticeable.

Act II also feels a little more free than its predecessor to edit the original material for 21st century decorum. Much of this happens around the ensemble of queer women who star in A Game of You, but all the stories seem to get a bit of trimming here and there. The rougher edges from the comic book that Act I seemed to take pride in leaving untouched instead get sanded down, here. I generally sympathize with these decisions, even when the changes left me aware of things gone missing.

I remember how excited I felt buy to the Season of Mists trade paperback just as it hit the shelves for the first time in 1992, a whole year into my personal Sandman fandom. It would at last plug most of the gap yawning between The Doll’s House and the point at which I began to read the monthly comic. And: I read it straight through exactly once, and put it away. I didn’t like it!

My copy lies in an unlabeled box in the basement, and I found myself both too impatient to dig it out and too miserly to spend the ten dollars or whatever on a fresh digital copy. So, I went into this listen nearly thirty years removed from a text I’d read a single time, of which I only remembered a few scraps of content plus my overall negative reaction.

The good news first: This story rules, actually. It’s so fun! Because I came into it essentially free of comparative experience or expectations, I took barely any notes; I simply enjoyed this devilishly delightful court intrigue featuring a truly sprawling cast of larger-than-life characters. (There goes the acting budget, again.) It’s not perfect; I wasn’t comfortable with how the imprisoned Nada has little to do for most of the storyline other than sob pitifully, for example. But I did find so much to like, and quite a bit more than I thought I would, given my recollection of it.

My new appreciation for this story hinges on what I now see as a misapprehension I held about Season of Mists’s implications for the whole epic’s overall cosmology. Between this storyline and 1991’s Orpheus one-shot (not yet adapted by Audible), I misread that every being in The Sandman’s universe went to Hell when they died. I thought that these books wanted me to accept that each soul gently escorted away by Death, that spunky goth girl, was immediately hurled into eternal torment! That sat really poorly with me.

Thanks to this fresh approach to the material, I now understand that the dead of The Sandman’s world go to whatever afterlife they expect.* The shades filling Hades’s caverns in Orpheus are ancient Greeks who had no reason to imagine ending up anywhere else, you see. And similarly, every permanent resident of Hell died believing they belonged nowhere else. Season of Mists makes this clear from the start, and from many angles: the narrator’s description of the Infernal plane, the protagonists’ interview with one of the veteran damned, and Lucifer’s own monologuing.

Season of Mists depicts the damned as spiritual masochists, reveling in a mixture of justified hopelessness and the license to blame their everlasting misery on forces entirely outside their control. They certainly do not represent every mortal that ever lived; merely those who ache to feel their self-assessed sins scoured out of them, forever. They are having the time of their lives, in Hell!

A more regrettable aside: The hapless schmuck at the end who, when faced with Hell’s surprise new management, whines “Oh no, it’s so much worse!” immediately reminded me of the guy from Rathergood’s (extremely NSFW) animated short The Wanky Shit Demon and I laughed. (This is one of the few notes I did take about Season of Mists. I’m sorry.)

I initially felt thrilled to hear this, quite sure that I’d somehow managed to never read the original comic—wow, a whole story about Lady Johanna Constantine, after her teasing introduction in Men of Good Fortune—but it turns out that of course I’d read it; it appears in the Fables & Reflections collection, after all, and I comfortably recognize every other story printed there. I had simply neglected to remember this one.

The Reign of Terror setting probably didn’t appeal to me, and the out-of-order way I originally read the early comics robbed the main character of any special significance. Similarly, I felt quite familiar with The Sandman’s Orpheus by the time I read this, so I never felt the shock of his introduction here. Only the story’s wonderfully unsettling climax jogged my memory, with Orpheus leading a choir of severed heads in song.

The radio adaptation fans its tail out a bit during this scene. Where the comic simply depicts Orpheus with his mouth open for a few panels while Lady Johanna adds narration about the mind-bending power of his song, the audio play has him really sing something lengthly, haunting, and Greek. As I write this, I do not know whether the song is original to this production, or if Orpheus’s voice-actor performs it—but it’s a very cool, surprising moment. And then the play reprises the whole song again after the episode ends, just so we can hear it unburdened with overlaid acting and narration!

A marvelous story in a wonderful setting. One of my favorites, and such a pleasure to hear acted out.

The man whom the comics introduce as “The dwarf Lycius” is here presented as “Lycius the Little”. Several other instances of the D-word are quietly excised from this adaptation, save one, after which Lycius boldly asks Augustus to call him by his name instead.

Removing the crass diminishment that characters throw at Lycius beforehand makes his retort seem a little less audacious than it does in the original text. While it doesn’t affect the story in any appreciable way, it does foreshadow the more complicated retuning that the adaptation will apply to Wanda in A Game of You.

Three Septembers and a January

Before this listen, I had never noticed the monthly progression—slightly disguised—in the titles of these three one-off stories.

This one’s another favorite, and a special one: the very first Sandman story I read. It happened to be the most recent monthly copy in my local comic shop when my new friends on GEnie’s online comix forum convinced me to give this series a look.

I feel certain that I hadn’t heard of Emperor Norton prior to this story, but I don’t recall ever feeling surprised at learning of his non-fictional status—did Gaiman mention it in the letter column? Did my online friends talk about it? Either way, my knowledge of His Excellency’s true story begins here.

Another notable line-edit for modern tastes: instead of dropping into velly solly feigned ignorance of English when an opium addict accosts him, Norton’s envoy Ah How now calls him a fool and tells him to get lost! I snorted. Good old Ah How, you tell ‘em.

Relatedly, the comic depicts Delirium as a Chinese woman when she drops in on Dream to describe her visits with the most desperate of San Francisco’s immigrant population. The radio play keeps all her dialog, but opts not to mention her appearance, even though it many times describes how Morpheus’s own likeness shifts to match his perceiver’s frame of reference. I can understand the edit, but feels like a cool little detail lost; I think it’s the first time the comic book suggests that all the Endless, not just Dream, have fluid appearances.

My thoughts on the adapted A Game of You, the first full Sandman arc I read in serialized form, will need to wait until my next post.

* Except, perhaps, for atheists; in “Facade”, Death tells Element Girl outright that the oblivion she craves is “not an option.” But Death, focused on inevitable departures while very uninterested in discussing destinations, makes this ambiguity fit.