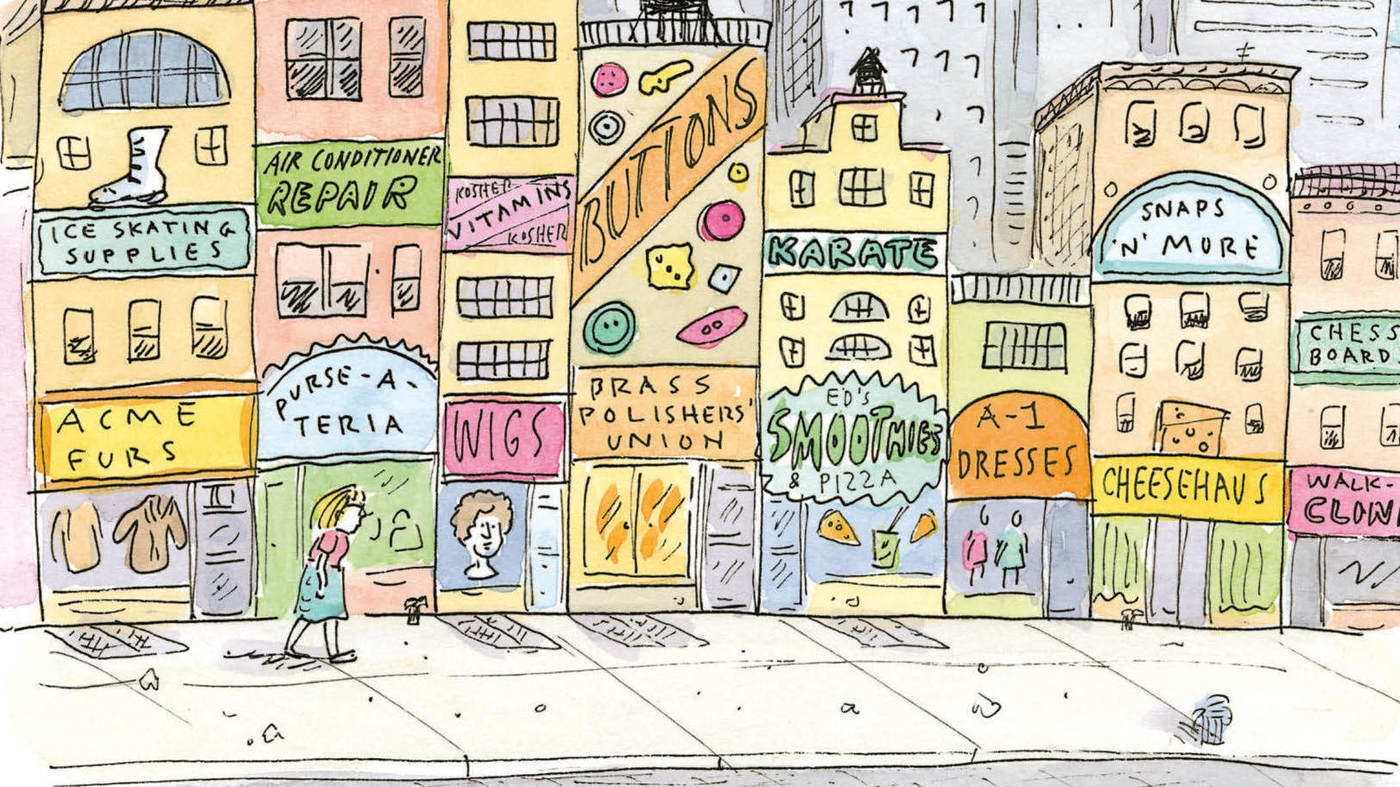 Ater I announced my impending move to New York City on Twitter, I asked what books about the city my friends would recommend to a newcomer. I received several excellent responses, one especially so.

One friend put forth Mark Helprin’s Winter’s Tale, a genre-novel doorstop set in a magical-realist Manhattan during the apex of its industrial-age gang wars. This friend allowed that the book might not make for the most practical guide to New York, but I have fallen quite in love with the story regardless, and look forward to paging through the enormous thing over the coming weeks.

Another introduced me to Going into Town, a quite recent guidebook in comic-book form by Roz Chast. According to the book’s own introduction, it adapts and expands upon a pamphlet that Chast created years ago as a present to her daughter, as she began her university career in Manhattan. As such, I found it perfect for my purposes, exactly what I needed to read now: a calming balm against the anxiety and unsureness that unavoidably accompanies my own preparations to live outside of New England for the first time in my adult life.

Chast’s book, every page hand-drawn and lettered by the veteran New Yorker cartoonist, pads out the guidebook content with a bit of memoir and philosophy among a scattering of observational-humor vignettes. The book’s title comes from her own parents’ phrase, as Brooklynites, for their occasional trips into Manhattan. She remembers the snacks her dad would pack on these journeys, and how he would stress out over subway tokens. A few pages later, she gives us a two-page comic about a chatty weirdo at Starbucks, or illustrates the folly of trying to walk your cat in the city.

Mostly, though, Going into Town presents a refreshingly direct and accessible newbie-guide to the island of Manhattan, appropriate both to visitors and to long-term arrivals like me. It educates the reader about the island’s fundamentals more clearly than any guide or explanation I’ve encountered heretofore. Having read through the book once, I can now run down the basics myself: the difference between streets and avenues, and what “up” and “down” mean in terms of grid-nagivation — and how they translate to “Bronx” and “Brooklyn”, respectively, on subway signage.

And I now have a coarse idea of that subway system — why some lines have numbers and others letters, and what you can tell about them by their labels, and what makes the S line special. Chast acknowledges that she can explain only so much about the tangled subway graphically, and assures the reader that a little bit of personal experience will fill in the rest. I have learned enough to trust her.

In fact Going into Town, less guidebook than primer, intentionally shies from delving into too much detail about any facet of New York, giving readers tools to instead navigate and explore Manhattan for themselves. The few places within the island that it does examine a bit deeper — the Met, Central Park — represent areas as dense and internally varied as the city that contains them, inviting active exploration over merely visiting.

Chast notes that the island is only two miles wide at its broadest, and advocates spending a day now and then choosing a nondescript street and then walking its length, “coast to coast”, taking the time to admire the jumbled homes, storefronts, and surprising bursts of color and culture pressed into every cubic foot of city. Find the store that sells only ribbons, then see more types of ribbon in one crammed room than you knew existed on earth. Let New York unfold its fractal around you, and walk into it. It will make you part of its infinite surface, if you choose to stay.

The arc of my life has decreed this fate for me, at least for the next several years, and I still feel nervous about it. But reading this book has, at least, let me feel less lost.