This post represents the latter end of the widest gap between Fogknife posts since I started this blog years ago. I have an interesting excuse, at least, as I noted earlier this month: my family is moving to New York City, letting my wife begin her job as Columbia University’s new systems librarian. I began this blog as a reaction, in part, to my first lonely winter in coastal Rhode Island, and I cannot say how my return to a richly dense urban environment will affect the frequency of my updates here. I do hope that I can resume the once-a-week-ish pace that I’ve managed to maintain all these years.

More generally, once December arrives and our temporary full-time job of moving is complete — the most intense and informationally complex relocation we’ve ever experienced, soaking up all our available attention this month — I’ll need to puzzle out how else to spend my time. Allowing the aura of Amy’s new job to translate into career slate-cleaning for myself, I may very well resume my search for technical writing opportunities, or I might end up in some other role informed by but distinct from my decades as a work-for-hire software engineer.

But until then, I take refuge from this ordeal with comics. It happens that I picked up an eleven-inch iPad Pro a few months ago, just before our trip to Paris, and have been surprised at my complete delight with this little slab. It is the third iPad I’ve owned, but the first whose use has brought me real joy. Among the purposes the flat and feather-light machine serves better than any digital device I’ve owned previously is its use as a comics e-reader. I had purchased a healthy shelf of weird comics via Comixology years ago, and for the first time I have been able to read them a page at a time, without feeling obliged to crawl through it zoomed-in, panel-by-panel.

With half my days lately in trains or planes or hotel rooms, I find the embrace of comics very welcoming. Of course I have continued to read as much print as ever, but the comics’ visually assisted carry-along offers such a calming balm in an increasingly stressful world. And so I re-read All Star Superman and King City over my Paris trip, then caught up with Jim Woodring’s Frank saga, and came into autumn — and the news from Columbia — hungry for more.

This past week, while passing the time in a Upper West Side hotel in between apartment viewings, I made a sour face and accepted Comixology’s insistent invitation to join its “Comixology Unlimited” program. It feels like a deal with the devil, and I enter into the contract aware of — and, to some degree, sharing — all my librarian friends’ great suspicion that the Comixology and Kindle Unlimited programs represent Amazon quietly seeking to supplant public libraries as yet another part of Jeff Bezos’s Great Work, his ultimate plan to convert as much of earth as necessary into a discardable staging platform for the sole purpose of launching his genetic material into interstellar space.

But, look: as soon as I agreed to that so easy one free trial month of Unlimited, an effectively infinite amount of back issues opened up to my immediate access, quite literally at my fingertips. I need only think of a title I’ve long since meant to read, and a smiling genie delivers it, without even the already-gossamer-thin friction of charging a server-stored credit card number. After practicing a modicum due diligence by setting a calendar alarm to (maybe) cancel the service before the first six-dollar monthly fee kicks in, I opened my arms and embraced the flood of so many beautiful old comic books.

And the most notable comic book that has sustained me during the utterly absurd New York rental-application process is Nexus Omnibus Volume 1, collecting the very first commercially published adventures of Mike Baron and Steve Rude’s titular superhero from the early 1980s.

I came to this book with a present but unusual relationship with its characters and stories. A thoroughly independent comic book, Nexus has come in and out of print under various publishing imprints over the decades. One of its many revivals in the early 1990s coincided with my own personal awakening to the internet and the sargasso sea of various commercial computer networks that existed alongside it for a time. In those days I hung around the comics forums on GEnie in particular, and its denizens all became very hyped about the impending Nexus relaunch. I remember, in particular, one of the regulars expressing eagerness to hear my own opinion as a newcomer to the series. I don’t recall how I must have replied to that, but I did enjoy the series enough to continue buying and reading it for most of its 90s run.

Reading these earliest issues, I tried to put myself in the mind of a comics-reader in 1981, about to dig into something so interesting that they’d rave about it on the primordial internet ten years later. Nexus, at its outset, seems focused on the question What if Superman had to straight-up kill every bad guy he fought? It only strikes me now, but to the best of my knowledge Nexus has no arch-enemies in the traditional superhero sense, due to his habit of vaporizing every villain he encounters within minutes of meeting them, no matter how colorful their own costume. (Exceptions exist, such as those who commit suicide as soon as he shows up.) Nexus kills out of self-defense, following compulsions given to him by an insane alien intelligence obsessed with terminally punishing cherrypicked injustices within a Star Wars-style fast-and-loose intergalactic setting. Nexus gets to retain godlike power so long as he obeys this compulsion. If it resists it — and he always resists it — his brain starts to break.

And so Nexus always labors through a haze of self-loathing, relying on the emotional support of the friends and chosen family that fate has thrown into his orbit. He tries to put a positive angle on his gruesome vocation by leading an ever-growing lunar community of all the refugees that he displaces by suddenly murdering the various autocrats and tormentors they had depended upon. But, crucially, he’s kind of terrible at it. He doesn’t even want to do it, but nobody else can do it better — or maybe he’s just shitty at project management, such that every time he tries to delegate responsibility or even take a simple vacation, all his projects start coming apart as would-be subordinates immediately start pulling at their individual and conflicting agendas in his absence.

These social and political obstacles, resistant to his usual solution of just hurling a sizzling fusion-ray at the problem, end up the ones that dog Nexus the most — the only problems that stick with him in between issues. All of which is to say that I have a lot to discover and sympathize with, reading these old comics in middle age, that I did not see as a teenager.

I want to describe two panels from the very first issue of Nexus, back when it was still black-and-white (and which, happily, this Omnibus edition makes no attempt to “improve” with colorization decades later). They do so much to establish the subtlety of Baron’s writing, as rendered with Rude’s art. (And these panels’ clean reproduction here exemplifies another benefit of reading comics on a tablet: I’ve never before enjoyed such an easy process of screen-shotting a page, cropping the relevant panels, and exporting it as an image for sharing with friends or for use as a blog-post illustration.)

The first is the one at the top of this post, the first depiction of Nexus storming out of his sanctum to hop into his two-seater spaceship so he can go fry the next poor asshole whose name got branded onto his brain. The refugee-citizens on his moon base salute him with raised fists, and he barely acknowledges them, because (we’ll come to learn, though nobody says it out loud) he kind of resents their presence. But here they all are anyway. 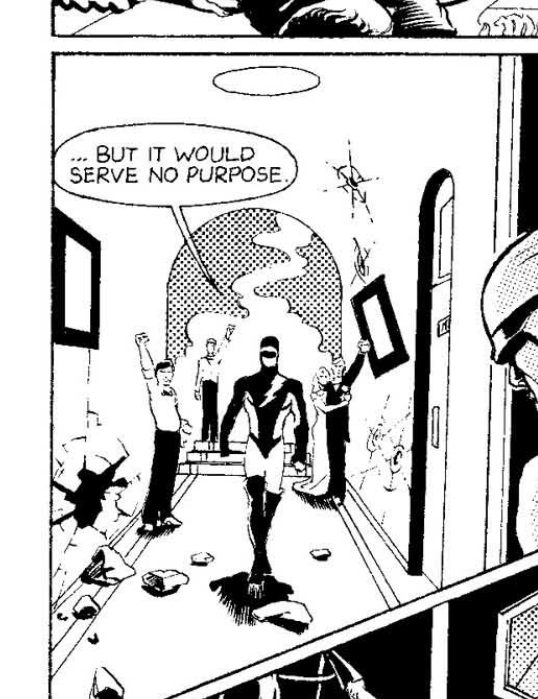 The other panel is much smaller than the first, occupying just a fraction of its page. Seen several pages later, it depicts Nexus making his exit from his hit-job, having just iced a long-retired dictator at a fancy ball. He feels especially rotten because he dispatched him in front of his terrified wife as she futilely shielded him with her own body, but then couldn’t summon the energy to answer her wailed demands to know why. He just slouches away, mumbling a bitterly meaningless reply.

Despite this being just a few pages into the first issue, we know that Nexus is already famous in this world; the dictator knows exactly what will happen to him, and — as this panel shows — civilians with the questionable fortune of bearing witness to Nexus’s violence salute him in stunned silence, just like his refugee-worshippers do, even when standing in a rubble-strewn aftermath of his just having murdered their boss. So much is said in this tiny panel, entirely visually, with the minuscule detail that two of the three saluting people that Nexus isn’t even looking at are dressed like service staff.

I can’t but think that a filmed adaptation of this scene would really linger on those saluting waiters — and the one saluting party guest in fancy dress, too! — the music swelling as they squared their jaws and dropped their serving platters and raised their fists high, in the foreground. Nexus, striding away, would pause in mid-step, would half-turn his head, considering… and then resume his walk. It’d be a solid scene, really sending the message home. But that’s not what this comic is about. The comic book wants you to know those people are there, and it wants you to see the way their salutes mirror those of the earlier refugees, and to think about everything thus implied. And yet it keeps them tiny and backgrounded, the comic book itself brushing them aside precisely like its title character does. Utterly frustrating. I love it.

This is just one tiny bit of a single facet of the very first story from a still-ongoing comics series, well before the art and the writing started to really hit their stride. I said “oh my god” out loud when I encountered that second panel, how much meaning and narrative payoff it packed into such a small space — and how it did it so casually, not even centered on its page. It shows as well as anything how the best comics are pretty great and I will consider making vile agreements with dark forces if that means I can read more of them.