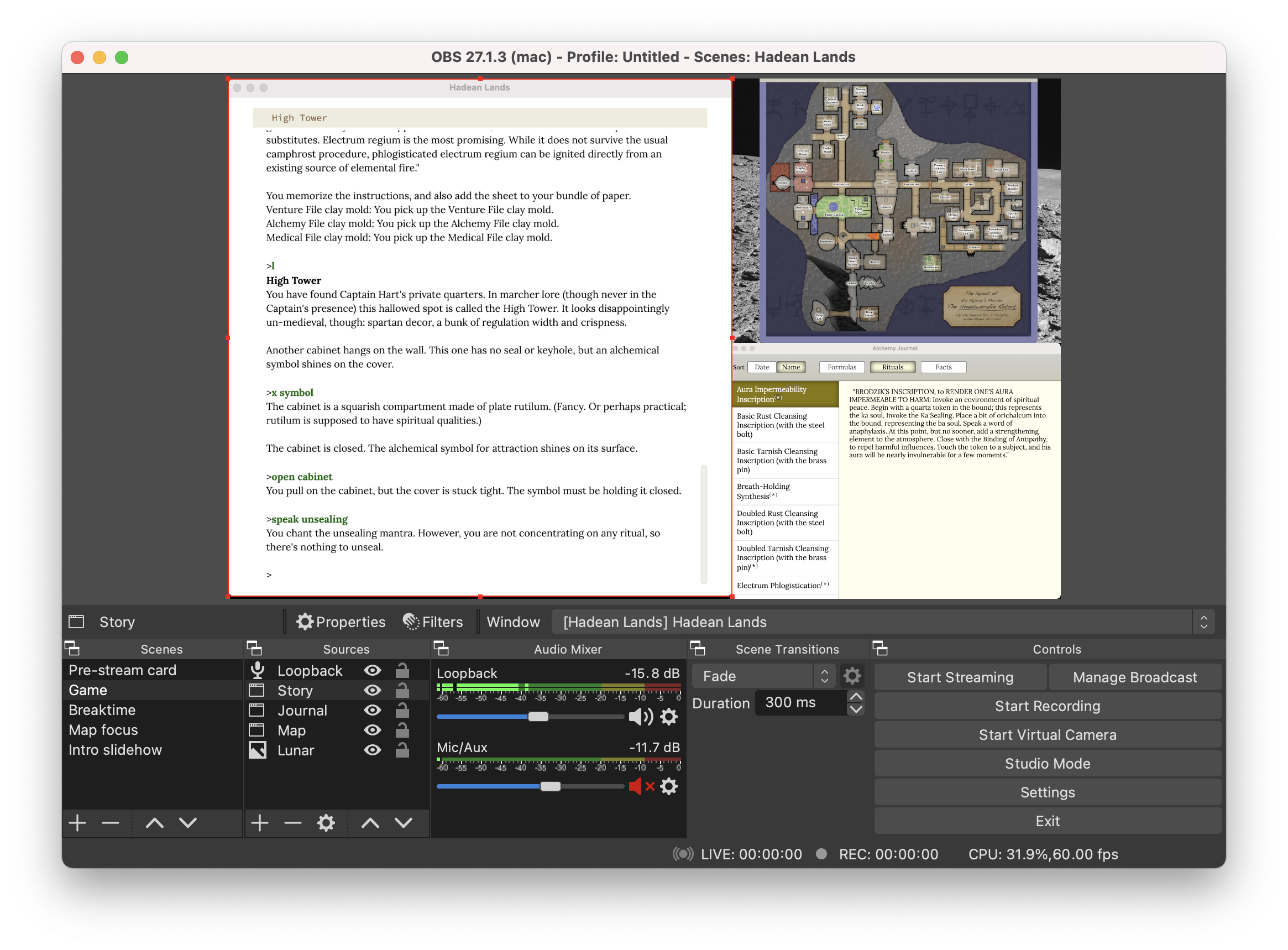 This month saw me bit by the streaming bug, playing Andrew “Zarf” Plotkin’s Hadean Lands for four hours, spread across two sessions. I set up a YouTube playlist that contains these two recordings. I plan to add further sessions to it, once I resume play after the holidays.

Doing this makes me feel very happy. I’ve wanted to play traditional, parser-based IF in public view like this for many years! Not only do I love this strange old style of adventure game, I love reading out loud for small audiences. Streaming lets me combine these while also encouraging me to actually finish some of these games. Text games often play a little better as a group activity, after all—especially the more puzzly ones, like Hadean Lands, where a few extra pairs of eyes on the action can help you return to details quite easily missed when playing alone.

It took me so long to finally wade into the streaming-pool because no inexpensive, Mac-friendly streaming solution existed whenever I checked, every year or two. But today, there is OBS, and I have to say that it is very good. I had never heard of it before friends with recent streaming experience unanimously recommended it to me, when I asked their advice last month. They were all correct: OBS is a best-case-scenario gem of an open-source, cross-platform application.

While its interface initially overwhelms and presents a number of rough spots, I nonetheless found myself able to speak its language quite quickly. Within a few hours of noodling around, I’d set up a basic “scene” collecting the three windows comprising a Hadean Lands session, all laid out and sized independently from my computer’s desktop view. I also made a handful of separate scenes, such as a zoomed-in map view for calling attention to my in-game location, and dropped a thematically appropriate NASA photograph of a lunar landscape behind it all in order to fill out the empty spots.

OBS hand-held me from there through the mechanics of actually setting up, performing, and recording my streams. YouTube is one of several platforms for which it offers a level of integration so complete that it helped me discover features I had never noticed through the service’s own website. I ended up attaching OBS to the YouTube channel I’d made a few years ago for dumping occasional PlayStation recordings onto, and that feels as fine a fit as any other.

I’m so pleased with the results! Other than some mysterious and occasional flickering in the game’s main text window, the problems that crop up during these first two broadcasts have been my own fault, all first-time-out mistakes. Both episodes, for example, feature my switching to the map view to discuss something map-appropriate, and then forgetting to switch back to the game-view for several minutes. Furthermore, the first episode opens with 15 minutes of dead air, and the second one has me unwittingly muting my headphones halfway in, resulting in my rudely talking right over Zarf’s guest author-commentary for quite a while before realizing the situation.

I apologized profusely to the author after that latter mishap, and thus we remain friends who shall return to the game on Sunday, January 2 at 6 PM Eastern time. In fact, I plan to keep at it for as many Sunday evenings as necessary until finally completing the adventure. And I reserve the right to keep streaming further adventures on Sundays beyond those, if it still feels good.