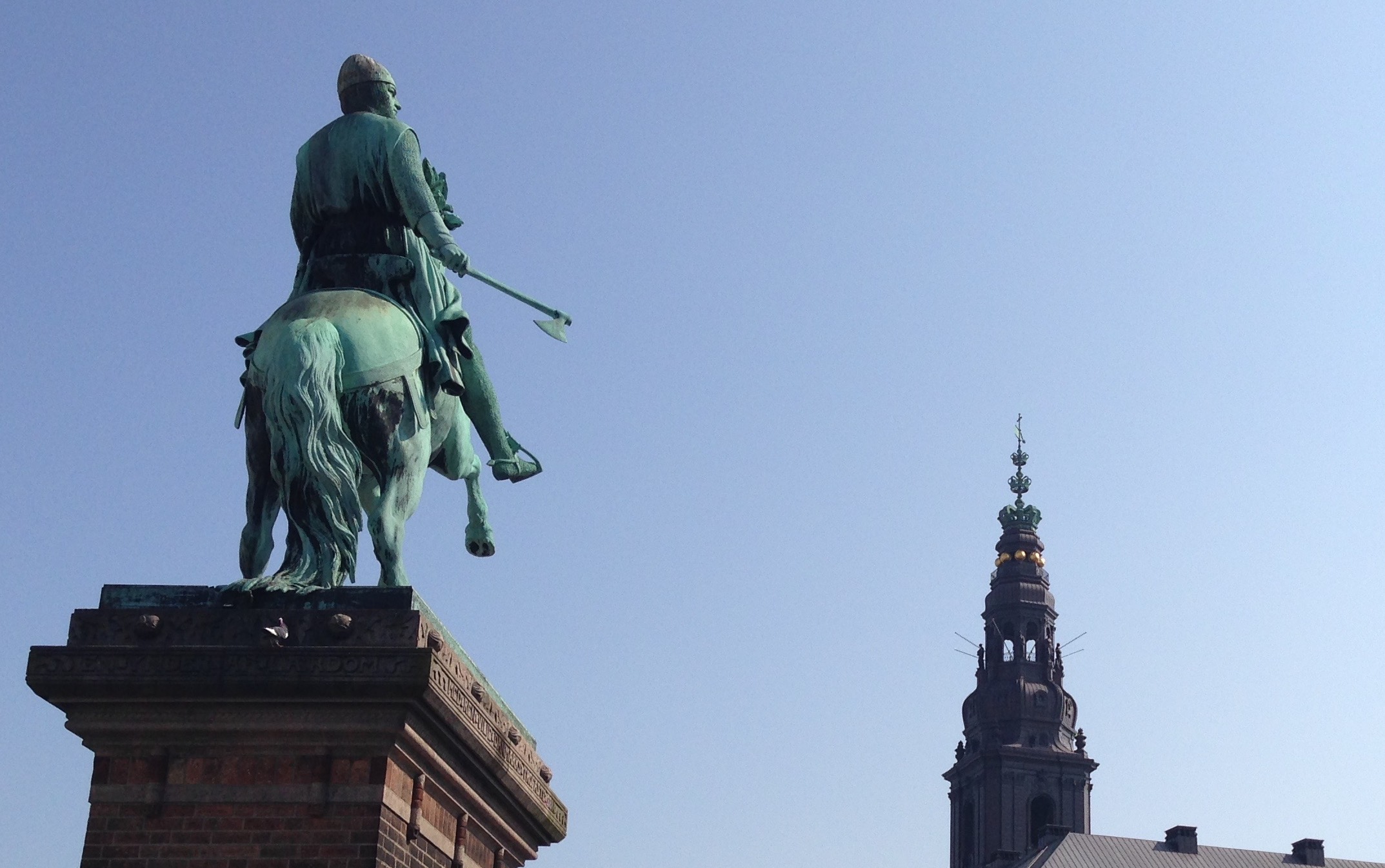 A year and a half ago I enjoyed my first overseas adventure, traveling to Denmark with my partner and a few close friends. I wrote a bit, while there, about the country’s friendly accessibility to Anglophonic monoglots like myself. Since returning, I’ve shared the tale of my encounter with the red thing under Aarhus. Today, inspired by a lovely printed-and-bound photo album our traveling companions recently gifted us, I’d like to describe two more events from the trip, both of them times I found myself troubled by something I struggled to recognize. One happened right after we landed in Cophenhagen, the other shortly before we returned home.

The moment I arrived, I felt a stressful confusion, and I wasn’t sure why. By “arrived” I mean a very particular moment: after passing through the nowhere-land of the airport, and then riding half-asleep (I don’t sleep on flights, no matter how long or dark) on the tram to our target station under Copenhagen, and at last emerging up, up into daylight far from home. Immediately I felt a thrilling collision of comfortable recognition with jarring novelty, something I expect any veteran international traveler takes in stride but felt entirely new to me. I found myself in the heart of a new city, expressing its embrace of me in myriad citylike ways with which I easily resonate — but also surrounding me with street signs all the wrong shape, and city buses covered in writing I couldn’t read, and statues of valkyries and armored dudes with war-axes, and myriad other ways of telling me that I had at long last made a foreigner of myself.

All this I recognized within moments! Nothing subtle about it, and I did my best to shake off my sleep-deprived jet lag to drink it all in (and get my phone synched up enough so its map would work). As I stood blinking and busily categorizing everything around me into buckets labeled familiar and foreign, I had the nagging sense that something that belonged in the latter bin eluded me. As I picked my way towards our AirBnB, I struggled to recognize what about the environment felt so subtly strange, other than all the obvious stuff. Once I’d crossed enough of the city’s wide intersections, the answer struck me — and not literally, thankfully. Bicycles! Copenhagen hummed with bicycles, like no place I’d ever seen before.

Now, I’ve visited and even lived in American cities that call themselves cyclist-friendly, and used to ride around town myself in years long gone by, so the sight of a few bikes hugging the curb doesn’t itself elicit surprise. And in my first few minutes in Denmark, the cyclists I saw, taken individually, were not engaged in any particularly un-bicycley activity. So it took my sleepy and overwhelmed senses a few extra turns to realize what a difference in degree surrounded me, compared to any pedal-powered display I’d ever seen stateside — outside of a road race, perhaps.

Where some American cities have anemic little bike lanes that cars share begrudgingly at best, bikes held equal esteem with cars in Copenhagen — and the road-sharing went in two directions. Bikes queued up at red lights, layers-deep within their wide, dedicated lanes, or directly amongst the cars when necessary. I didn’t see a single cyclist ignore a light, something I could never say about a day in bike-laden Boston. Furthermore, I don’t recall seeing any cyclists wearing American-style bike helmets, which suggested to me that they didn’t grimly expect to be flattened at any moment by a carelessly flung-open car door. Just a wholly different world, all within this single aspect of city life.

During my days in Cophenhagen, I remained a dedicated pedestrian, just like back home. But I did spend the whole time in perpetual mild marvel over this facet alone, once I knew to see it.

And then, after two weeks in Denmark, I felt a stressful confusion, and I wasn’t sure why. Day by day, even as I continued having a great time seeing and learning so much, I could once again feel something unwelcome creeping in, ratcheting up a sense of uncertain irritation. I don’t know what triggered my understanding this time, and I don’t think it came all at once with a sudden camera-pullback as with the bicycle hordes, but it arrived anyway.

It dawned on me that the Danish-language signage, whose illegibility so enthralled me upon arrival, had slowly transformed from a delightful novelty to a source of constant, low-level mental stress that I’d unwittingly let accrue for several days. Danish uses the same alphabet as English, of course — along with a few diacritical-trimmed letter-variants — so even though I consciously knew that I couldn’t read most of the signs that always surrounded me in my urban wandering, the automatic parsing processes in my brain would always try anyway, only to get flummoxed again and again.

Having quite recently read Daniel Dennett’s Consciousness Explained, with its metaphor of mind as a gaggle of daemons in a computer system, I can’t help but imagine my language-parsing process — chorded into the looping braid of sensory inputs and processors that make up my sense of self — suddenly spewing out errors and warnings all over the place after decades of quiet operation. What was happening?! Nothing made sense anymore! But as just one voice in my personal pandemonium, its complaints went easily ignored, until after many days… er, my hard drive filled up with log-files, I guess? My own failure to extend Dennett’s metaphor notwithstanding, I do believe that here lay the source of my invisibly accumulating confusion.

Happily, this realization came not long before the flight home, where I could massage my language-jangled neocortex by staring at the curt but soothing English of baggage carousel signs in Logan Airport for as long as I wanted. I ended up feeling good about my ability to self-diagnose and treat these little travel-novice syndromes as they happened, and hope to get in more first-hand practice in the not-too-distant future.