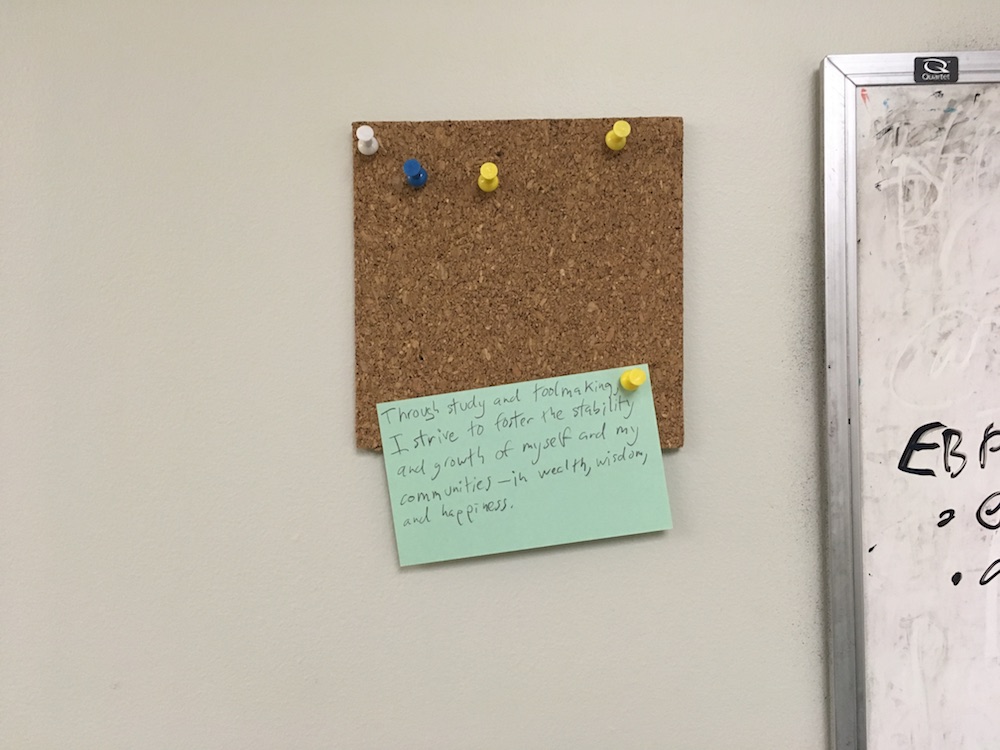 I learned the value of mission statements — super-succinct summaries of an entity’s raison d’être — while starting to organize the nonprofit I co-founded a couple of years ago. Since then, my application of mission statements has transformed and expanded, growing in steps from legal-document practicality to defining the heretofore unwritten goals of a long-lived group project, and finally to serving as a pocket-sized personal guide-star.

While I researched how to launch a nonprofit, all the better books I consulted agreed upon the ratification of a mission statement as a first step, something the would-be founders should accomplish before making any further major decisions about the nascent organization. This task has the founders unanimously agree upon a short statement of the nonprofit’s reason for existing, and then enshrining it such that it always sits in the sight-line for both themselves and any of their successors leading the nonprofit in the future.

Here is the mission statement of that nonprofit, standing today just as it did two years ago:

The Interactive Fiction Technology Foundation (IFTF) helps ensure the ongoing maintenance, improvement, and preservation of the tools and services crucial to the creation and distribution of interactive fiction, as well as the development of new projects to foster the continued growth of this art form.

Half the magic of a well-implemented mission statement lies in how it defines, by omission, everything the nonprofit doesn’t do. A nonprofit that pursues every noble-sounding goal it sees, even ones that all its constituent members individually appreciate, would quickly lose all its focus to effectively accomplish anything at all. In IFTF’s case, we’ve several times passed on opportunities to help causes in the general sphere of interactive fiction that just wouldn’t fit in the intentionally narrow mission we gave the organization. Board members have quickly learned to say “that sounds great, but I’m not sure it would be on-mission” — and not to feel like an uncaring jerk while doing so.

This negative angle does include a happier corollary: when the board encounters a promising project proposal that does fit the mission, this compatibility often amplifies our interest in the idea into outright excitement. We’ll trip over each other to find the best ways that the organization can help realize it, confident that we’ve found something rare and good. That’s a healthy and meaningful mission statement working exactly as it should: as passive gatekeeper, and active energy-focus.

IFTF also follows the common pattern of other multiple-program nonprofits by dedicating volunteer committees to the oversight of its various ongoing public-service projects. Each of these committees has, at its core, a charter document, and each of these charter documents begins with a mission statement. Here for example, is the chartered mission for the IFComp committee:

IFTF’s IFComp Committee oversees the operation of the Annual Interactive Fiction Competition (“the Competition”). Its membership at any given time includes the Competition’s current organizers as well as its official advisors. As a group, they have the power to set the Competition’s year-by-year direction and definition.

It works for bringing a group of volunteers together under a common cause, which is all the charter cares about. However, this statement doesn’t have much to say about IFComp itself! This is why a year ago, around the same time I decided to make 2017 the final year I’d run IFComp before passing the responsibility along, I led an effort to define a separate mission statement specifically for the competition.

In retrospect, this represented a turning point for me in my view and usage of these things. Prior to this, I helped craft mission statements to affix to legal entities because of an external expectation that they exist. My proposal to add one to IFComp, however, came entirely self-directed, and only during my fourth year as its organizer. After my experiences with IFTF, a project of IFComp’s complexity and teamwork suddenly struck me as quite naked in lacking a mission statement, even though it had managed without one for its prior 22 years.

And once I had proposed it, the whole IFComp committee took this task seriously! After some weeks of discussion in email and chat, we produced the following mission statement, which now heads the competition’s About page:

The Annual Interactive Ficton Competition (IFComp) welcomes all kinds of text-driven digital stories and games, making them freely available in order to encourage the creation, play, and discussion of interactive fiction.

Finally, the idea to write a mission statement for myself didn’t occur to me until the start of this year. (This may have flowed naturally from my official passing-along of IFComp duties with the turn of the calendar’s page.) I know very well that I have hardly invented the idea of personal mission statements; in fact, I likely drew on my dim memories of their description in Stephen Covey’s First Things First, read decades ago on a mentor’s advice.

So some day in late January, I set some time aside to draft something to replace my life-long pre-installed mission of “I wanna do stuff I like.” I did get as far as writing something down, at least:

Through study and toolmaking, I strive to foster the stability and growth of myself and my communities, in wealth, wisdom, and happiness.

As I type it out again a few weeks later, it reminds me how it does not look fully baked yet. In particular, “study” feels like it’s doing a lot of work here. I decided at the time that it covers reading, blogging, gameplay, podcast production… just about all my interactions with culture, really, and honestly that seems overloaded. And the rest feels a tad generic — who doesn’t want those things?

Still, a start. I liked it well enough to pencil it out on an index card and pin it to the corkboard on my office wall, per the photograph accompanying this article. I consider that a fine staging area, not as ephemeral as the whiteboard hanging beside it, but hardly permanent either. It has already proved its worth as a razor, encouraging me to cut away several ill-fitting projects I’d been dragging along for months. I can only keep it pinned at eye-level for now, and plan to revisit it later in the year for further sharpening.

Next post: How I use OmniFocus, ten years on

Previous post: We can reclaim the second amendment from the NRA