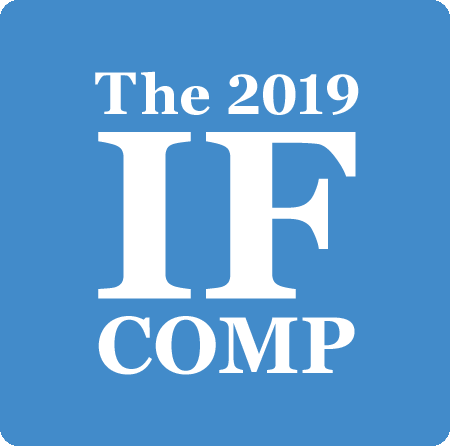 The Annual Interactive Fiction Competition celebrates its 25th year in 2019, and for the third year running it offers the Colossal Fund, a special cash prize pool that gets shared among the authors of the top two-thirds of the year’s IFComp entries. It seems I’ve never promoted this here on Fogknife, even though the Fund began life during my own IFComp organizational tenure — so allow me to correct that! The Fund has proven one of the most popular changes to IFComp that I helped introduce, and I’m excited to see it pushing new boundaries this year under its current leadership.

The first two Colossal Fund instances handily met their respective funding goals, so this year IFComp organizer Jacqueline Ashwell has set it to $10,000, the largest so far. From now until mid-November, anyone can donate to the Fund through that blue PayPal button on the IFComp prize page. The Fund is managed by IFTF, an American charitable nonprofit, so all contributions are tax-deductible where allowed by law. Those who do contribute will see their name (or, if desired, an anonymous placeholder) enshrined on the Fund’s annual honor roll. IFTF retains any contributions beyond the maximum, and so far has always applied them directly to the following year’s Colossal Fund.

One subtle feature I especially like about Colossal Fund is the group effort involved at every level, and not just in the obvious facet of the many generous hands that build up the Fund every year. As IFComp organizer in 2017, I had the privilege of presence for the Fund’s inception, and so I know how Nick Montfort suggested the name in 2017, as a nod to Colossal Cave — whose iconic treasures get referenced in the names of the Fund’s donor-rankings. (And so we have “platinum bar” donors, “jade figurine” donors, and so on.) Andrew Plotkin led the design of its mechanics, including the graceful curve that determines which IFComp place-finisher gets how large of a portion, a system inspired by Etienne Vouga’s single-handedly setting up the Colossal Fund’s unnamed predecessor as a special IFComp prize in 2015.

I am a fan of that curve: each step away from first place getts a progressively smaller share, but only a little, step by step. This gently downward slope aims to avoid any hard feelings about losing a lot of money due to a one-place difference in IFComp’s final ordering, where entries sometimes end up separated by a hundredth of a point in judges’ collective opinion. And we intentionally kept the minimum payouts above ten dollars, just large enough to serve as a palpable token of recognition.

Speaking of judges: the competition always needs judges. Why not make some plans to join this year as a judge? The only requirement is that you play at least five of the mumble-umpteen games which will launch at https://ifcomp.org on October 1, submitting your ratings through that website by November 15. You can find everything you need to know about the competition, its processes, and its history at that website (built, I will aside, largely by myself around 2014, and maintained since by a small team of excellent volunteers).

Next post: Places to (not) use your laptop in Paris